Update Required To play the media you will need to either update your browser to a recent version or update your Flash plugin.
By VOA
Jul 30, 2018


The recent Ministerial to Advance Religious Freedom, hosted by the United States in Washington, discussed ways to combat religious persecution and ensure greater respect for religious freedom. Among the topics of discussion was Iran.

In an interview, U.S. Ambassador for International Religious Freedom Sam Brownback said, “Iran has been one of the worst countries in the world on religious persecution:” 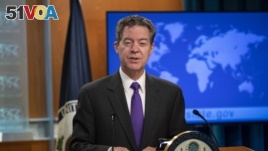 Secretary of State Mike Pompeo described an example of religious persecution in Iran, this time of a Sufi, during his recent speech at the Reagan Presidential Library in California:

“Last month, a simple man, a bus driver, a father of two children, and a member of the Iranian Gonabadi Sufi Dervish Community, was convicted and sentenced to death. His sentence came on questionable grounds following violent clashes between security forces and the Dervishes...He was reportedly denied access to a lawyer before and during his grossly unfair trial...Sadly, on June 18th, the regime hanged Mr. Salas in prison.”

Radio Farda reports that verdicts have now been issued against 258 Iranian dervishes charged with national security crimes for participating in the February protests. The International Federation of Human rights Societies has described the trial of the dervishes as a “mockery of justice” and “a blatant violation of international principles and standards.” Sentences include exile, lashings and long prison terms.

On the opening day of the Ministerial, U.S. Secretary of State Mike Pompeo wrote that the “Trump administration is passionate about promoting and defending international religious freedom,” not just in Iran but everywhere.“But the challenge,” he added, “is too big for any one nation,” Others, Secretary Pompeo said, must join us as “we fight for the persecuted, speak out for the voiceless, and work together to pave the way for greater religious freedom around the world.”