Update Required To play the media you will need to either update your browser to a recent version or update your Flash plugin.
By VOA
Jan 17, 2017

“Clearly as you look back on my two years at the State Department our ability to assist Secretary of State Kerry in his findings that ISIL's activities in Iraq constitute a genocide against Christian, Yezidis, Shia communities and crimes against humanity against the Kakai and the Mandeans and other minority groups was a very important achievement here and had the impact of grabbling the attention of the international community.” 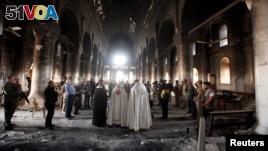 This world-wide attention made it possible to hold two pledging conferences that helped raise over $2.2 million from countries around the world to help make it possible for these religious minorities return home safely.

The United States as a country will continue its commitment to the principle of religious freedom at home and abroad, said Ambassador Saperstein:

“I'm very optimistic that the robust efforts on behalf of religious freedom that has marked the last several administrations, Republican and Democrat, will remain a hallmark of our foreign policy moving into the future. . . .It really shows the consensus view that religion plays such an influential role in foreign policy issues that we confront and must be addressed more effectively, must engage religious communities around the world on behalf of the values that we promulgate.”

Religious liberty is one of America's great contributions to the world, said Ambassador Saperstein. “And as an American I'm extraordinarily proud to see how many countries join us in that vision of the fundamental rights of people to live equally as citizens without regard to their religion.”

The United States is making a difference in the world on this issue and will continue to do so.