Update Required To play the media you will need to either update your browser to a recent version or update your Flash plugin.
By VOA
Aug 16, 2017


It seems that President Bashar al-Assad's voracious prison network has swallowed and silenced another individual whose peaceful views were an affront to the Syrian regime.

Noura Ghazi Safadi,the wife of one of Syria's most renowned advocates for democracy and free expression, Bassel Khartabil Safadi, announced August 1 that she had been informed that her husband was executed in October 2015 days after he was taken to an unknown location from Adra prison. “This is a loss for Syria. This is a loss for Palestine. This is my loss,” Noura Ghazi Safadi wrote in a Facebook post. Thirty-four years old at the time of his death, Mr. Khartabil was of Syrian and Palestinian descent. 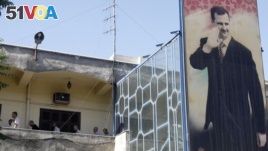 Syrian detainees arrested for participating in protests against Syrian President Bashar al-Assad's regime at a detention facility in Damascus.

A vocal advocate for freedom of expression and access to the internet, Mr. Khartabil was the founder of Aiki Lab in Damascus in 2010, an on-line community of open-source information and programs that brought together engineers and democracy campaigners, and helped make the internet accessible to the Syrian people. After peaceful pro-democratic protests broke out in 2011, initiating the Syrian revolution, Mr. Khartabil's work helped keep activists informed and connected. He was arrested in 2012.

After his arrest and amid credible rumors of his being tortured, many international human rights monitors, as well as the United Nations, condemned his detention and called for his immediate release. The United States labelled him a “prisoner of conscience.”

But the Assad regime would not release Bassel Khartabil Safadi, any more than the tens of thousands of other innocent civilians they have imprisoned since the uprising began, an imprisonment characterized, as U.S. State Department officials have noted, by suffocating overcrowding, beatings, electrocutions, rapes and, as in his own case, secret executions.

In a statement, State Department Spokesperson Heather Nauert said the U.S. deplored his execution and extended heartfelt condolences to his family, friends, and loved ones.

The United States is outraged, she said, “over the repeated acts of brutality, including torture, and extra-judicial executions conducted by the Syrian regime. The Assad regime bears responsibility for the widespread suffering, death and destruction it has inflicted on its own citizens.

“Every day, courageous individuals work to recover from the devastation the Syrian regime has wrought, and the United States will continue to stand with them as Syrians work towards a negotiated political settlement that brings an end to the conflict.”