Update Required To play the media you will need to either update your browser to a recent version or update your Flash plugin.
By Daniel Schearf
May 24, 2017
MOSCOW —

Russia's Communist Party, a successor from the Soviet Union's, is marking 95 years since the founding of its youth Pioneers movement.

"An entire group has today joined the Komsomol," said Chairman of Russia's Communist Party Gennady Zyuganov. "These are guys who we made Pioneers some time ago. And recently 60,000 people of the younger generation have become party members. The organization lives and progresses."

But the Communist Party, like its 73-year-old leader, is aging.

"The statement that the Communist Party is a 'party of pensioners' is quite correct, but just partly," said Communist Party member and artist Igor Petrygin-Rodionov. "Because a change of generations is going on, and the older generation is leaving — though struggling and quite reluctantly." 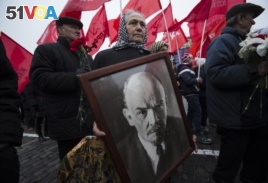 FILE - A woman carries a portrait of Lenin as she walks with the Communist Party members and supporters to place flowers at the Tomb of Soviet founder Vladimir Lenin, at Moscow's Red Square, Nov. 6, 2014.

Russia's Communist Party is using images from popular and Western culture to try to attract younger members. But selling communism to Russia's modern youth is no small challenge.

Concerns about corruption and growing inequality are rallying some young Russians, but not necessarily to their grandparent's communist party.

"Not everybody accepts the reproduction of the Soviet past. But the ideas of socialism and social justice, as well as positive attitudes to the Soviet past, start prevailing among many young people, as social studies show," said Klychkov.

To re-energize the party, Russia's communists may for the first time in 24 years elect a new leader. Klychkov, the party's candidate for Moscow mayor, is one possibility.

"The question of electing the party leader is for the party congress. And the congress will take a decision in the near future on May 26 or 27," said Klychkov.

Regardless of any next generation leadership, few expect the once revolutionary party of Vladimir Lenin to pose a real challenge to Russia's ruling elite. The Communist Party has supported the Kremlin on most domestic policies and almost all foreign ones.