Update Required To play the media you will need to either update your browser to a recent version or update your Flash plugin.
By VOA
Jan 26, 2018


The United States is intent on stopping chemical weapons attacks and denying impunity to those who use or enable the use of such weapons. On January 22, in Syria, more than 20 civilians, most of them children, were victims of an apparent chlorine gas attack, said U.S. Secretary of State Rex Tillerson.

“The recent attacks in East Ghouta raise serious concerns that Bashar al-Assad's Syrian regime may be continuing its use of chemical weapons against its own people,” warned Mr. Tillerson. But it is Russia, he said that “ultimately bears responsibility for the victims in East Ghouta and countless other Syrians targeted with chemical weapons since Russia became involved in Syria.” 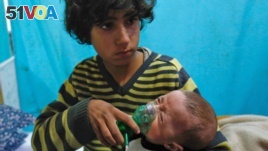 A Syrian boy holds an oxygen mask over the face of an infant following a reported gas attack in eastern Ghouta. (Jan. 22, 2018.)

In so doing, Russia assumed responsibility as guarantor for ensuring that its Syrian ally cease all use of chemical weapons and fully declare its chemical weapons stockpile for destruction under international oversight.

But Russia has not lived up to this promise.“There is simply no denying that Russia, by shielding its Syrian ally, has breached its commitments to the United States as a framework guarantor,” said Secretary Tillerson. It has betrayed the Chemical Weapons Convention and UN Security Council Resolution 2218, and has twice vetoed UN Security Council resolutions to extend the Joint Investigative Mechanism, an impartial and professional entity established to make attribution findings for the use of chemical weapons in Syria.

Russia's failure to resolve the chemical weapons issue in Syria calls into question its relevance to the resolution to the overall crisis.

Over 25 like-minded countries are committed to upholding the Chemical Weapons Convention and its vision of a world free of these heinous weapons and have joined the International Partnership Against Impunity for the Use of Chemical Weapons. We look forward to this number growing.

Those who ordered and carried out chemical weapons attacks have been put on notice, said Secretary Tillerson. “You will face a day of reckoning for your crimes against humanity and your victims will see justice done.”

“We call on the community of responsible and civilized nations to put the use of chemical weapons to an end,” urged Secretary Tillerson. “The choice is yours. The people of East Ghouta are watching and the rest of the world is watching as well.”