Update Required To play the media you will need to either update your browser to a recent version or update your Flash plugin.
By Daniel Schearf
Apr 21, 2017
MOSCOW —

There are six gay Chechen men hiding in the suburban Moscow home because they fear that their lives, or their relatives could be in danger.

They fled Russia's Republic of Chechnya as independent media reported a crackdown on gay men involving hundreds of abductions, torture, and at least three murders.

"I had experienced it before and thought that the same thing was going on. I did not think that it was on such a mass level. If they caught one man, they found two or three [more] from his [phone] contacts. If they caught them, then another nine were caught. That's how it was happening," says one man living at the house under the false name Ilya to protect his identity.

Rights groups say discrimination and abuse is common in Chechnya's conservative, religious culture, where being openly gay is not accepted. 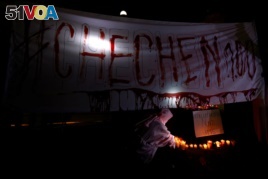 Activists from the group Chok3 paint a banner with their own blood during a protest discrimination and violence against the gay community in Chechnya and other regions of Russia, outside the Russian embassy in Mexico City, Mexico, April 20, 2017.

"I wish I could forget it as soon as possible," says another gay Chechen hiding at the house who gives his name as Timur. "It won't be forgotten here, even in Moscow. There is no way back to Chechnya, where everyone would point fingers at me."

The men take sedatives to calm fears that Chechen authorities, or their own relatives, could find them.

"I have heard also that the guys that had been caught were given back to their parents. The parents were told: 'Either you'll kill him or we'll kill him.' It is called to wash the disgrace away with the blood. The disgrace that such a man brought into his family."

Chechen authorities not only deny the allegations, but the very existence of gay Chechens.

"Some 'good people,' in quotes, write to us that in our republic, it is not quite decent to talk about it, people are being detained, killed, and even one family name was mentioned," Kadyrov said. "Someone said he had been killed, but he is at home."

Russian authorities agree, they say there is no evidence that gay Chechen are abused, and no reported abductions.

"What is going on in Chechnya now is the utter expression of what is going in the whole of Russia," said Olga, of the Moscow Community Center for LGBT. "In Chechnya, they have their own authorities and their own laws that allow total criminality. But similar things happen in small Russian towns from where they have to flee to bigger cities."

Russia's independent Novaya Gazeta newspaper first reported the alleged abuse of gay Chechens, including three murders — one by torture and two by their own relatives.

Its reporters have since received a number of threats, including a white powder mailed to their office this week from Chechnya.

"We have worked for over 20 years, and there has not been a single case when we were found guilty of spreading lies," said special correspondent Irina Gordienko. "And the fact that the authorities call [our report] a provocation, and denunciation, let them prove it. We can't reveal our sources because it would be such a threat to people that they could be physically eradicated."

For some of the Chechen men hiding in the temporary safe house, it's not just in Chechnya but in Russia where they don't feel safe.

Olga Pavlova and Ricardo Marquina Montanana contributed to this report.