Update Required To play the media you will need to either update your browser to a recent version or update your Flash plugin.
By Mariama Diallo
May 18, 2017
WASHINGTON —

For the first time in almost 20 years of existence, the U.S. Commission for International Religious Freedom designated Russia as a Country of Particular Concern because of an increase in repressive policies it says range from administrative harassment to arbitrary imprisonment.

“The first thing is to make it clear to the Russian government in words, directly, ideally from the president of the United States, that we have grave concerns about the direction of religious freedom,” Daniel Mark, USCIRF's vice chairman, told VOA, and “not just the rules but the trajectory, which has been really concerning of late and played a big role in our decision.”

Last month, Russia's Supreme Court ruled the Jehovah's Witnesses religious group was an “extremist” organization and must hand over all of its properties to the state.

Via skype, Robert Warren, “To be labeled such a way as though we are extremist is clearly a misapplication of the laws on extremism. Clearly Jehovah's Witnesses ... should not really be the target because we are not a threat in Russia or any other country in the world. We are active in over 240 lands,” Robert Warren of the world headquarters for Jehovah's Witnesses told VOA.

Warren says 175,000 people in Russia identify with the faith, and since the ruling, the organization's website has been blocked and no Jehovah's Witnesses Bibles have been allowed in the country.

The Central African Republic is also a Country of Particular Concern because of “ethnic cleansing of Muslims and sectarian violence” in this multiyear conflict. 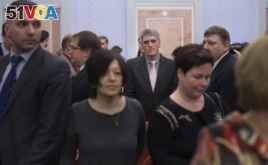 This week, hundreds of civilians sought refuge inside a mosque in the CAR town of Banguassou, amid ongoing attacks by Christian militias that have killed civilians and U.N. peacekeepers.

Parfait Onanga-Anyanga, head of the peacekeeping mission in CAR (MINUSCA), strongly condemned the killings, which he said “targeted a minority with the intention without a doubt to inflame the violence, not just in Banguassou but also in the whole of the territory.”

In Myanmar, government and societal discrimination make the Rohingya Muslims vulnerable; some even fled the country. Christians are restricted from public worship and subjected to coerced conversion to Buddhism, warranting a Country of Particular Concern designation. The government and military deny all allegations.

In Pakistan, the commission recommended the blasphemy laws be repealed because “they are in one way or another a violation of Article 18 of the Universal Declaration of Human Rights.”

The report covered 35 countries, and when it comes to religious freedom, the new administration has to act, and they say, "We want the Trump administration to make it an issue, a priority in its foreign policy ..."