Update Required To play the media you will need to either update your browser to a recent version or update your Flash plugin.
By VOA
Jan 13, 2017


For the past four years, the Russian government has sought to silence critics of government policy, accusing them of being disloyal, foreign-sponsored, or even traitorous.

A central tool of the Russian government in executing this crackdown has been the 2012 law requiring nongovernmental organizations to register as “foreign agents” if they receive any foreign funding and engage in broadly defined “political activity.” The use of the term “foreign agent” is a deliberate choice suggesting that these organizations are traitors. The definition of political activity under the law is so broad and vague that it effectively extends to all aspects of advocacy and human rights work. 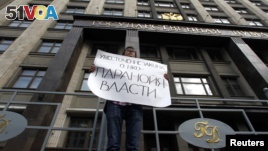 To date, Russia's Justice Ministry has designated 155 groups as “foreign agents.” Indeed, under this legislation Russia has targeted &#8206;organizations dedicated to defending human rights, fighting torture, preventing the spread of HIV/AIDS, and even protecting migratory birds.

In February 2016, a court forced the closure of Agora Association, one of Russia's leading human rights organizations, in response to a Justice Ministry suit alleging that the group violated the “foreign agents” law and carried out work beyond its mandate.

Founded in 2005, Agora human rights association is a network of lawyers and advocates who have defended the many Russians accused of political activity under Russian President Vladimir Putin. Among its high-profile clients are the opposition rock group and arts collective Pussy Riot and opposition politician Alexei Navalny.