Russia Must Fix Crisis it Caused in Ukraine

Update Required To play the media you will need to either update your browser to a recent version or update your Flash plugin.
By VOA
Jun 11, 2018


On February 27th, 2014, Russian military forces, wearing masks and no military insignia, infiltrated Ukraine's Crimean Peninsula, took over the Supreme Council of Crimea and proceeded to capture strategic sites across the peninsula. Ultimately, this action led to the installation of a pro-Russian government in Crimea, and in March, an illegitimate, fabricated “referendum” there that attempted to legitimize Russia's annexation of Ukrainian territory.

“When Russian forces entered the Crimean capital in 2014, it was a direct violation of the UN Charter,” said U.S. Permanent Representative to the United Nations Nikki Haley at a UN Security Council meeting in late May.“Since then, Russia has pushed into eastern Ukraine, creating a humanitarian crisis that threatens millions.”

The conflict between Ukraine and Russia, which is fighting through a proxy of separatist militias, rapidly expanded to other parts of eastern Ukraine, particularly the Donbass region, and continues today. And despite its transparent denials, there is no doubt that Russia is driving the conflict. 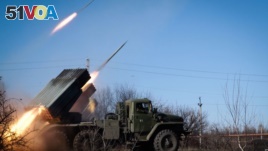 “The militants in eastern Ukraine report directly to the Russian military, which arms them, trains them, leads them, and fights alongside them. Russia's combined forces in eastern Ukraine include thousands of tanks, armored vehicles, and heavy artillery.”

“This is not a frozen conflict – the month of May has seen security conditions worsen with increased ceasefire violations, higher civilian casualties, and growing military casualties.”

“Russia can unilaterally fix this wrong. And the first step is acknowledging it,” said Ambassador Haley. “Resolution of this conflict is not only possible, it is profoundly straightforward. Russia needs to withdraw its military forces and equipment, call on its proxies to honor the ceasefire, and fulfill its commitments under the Minsk agreements.

“We condemn, in the strongest terms, Russia's involvement in eastern Ukraine and its purported annexation of Crimea. Until Russia returns the Crimean Peninsula to Ukrainian control, U.S. sanctions related to the invasion of Crimea will continue. And until Russia pulls its forces out of eastern Ukraine and honors its Minsk commitments, our sanctions in response to its flagrant misconduct in the eastern part of the country will stay in place.”