Update Required To play the media you will need to either update your browser to a recent version or update your Flash plugin.
Daniel Schearf
November 27,2015


MOSCOW— Russia is preparing sanctions against Turkey and stepping up military strikes over the downing of a Russian bomber along the Syrian border.

The feud has added another dimension of conflict to the multifaceted war in Syria, and political analysts say Russia's doubling down on its Syria campaign raises the stakes in Moscow's wider efforts to negotiate itself into a new world order.

Russia increased inspections on Turkish imports as part of a range of sanctions against Ankara that include suspending visa-free travel with Turkey, which millions of Russians visit every year.

“Well, the damage will be considerable," said Pavel Felgenhauer, a defense analyst and columnist. "Quite a number of economic and political projects will be put on hold or actually maybe even scrapped.”

Russia’s military also retaliated for Turkey’s shooting down its plane by increasing attacks on rebels along Turkey's border with Syria and deploying advanced missile systems.

The tension between Russia and Turkey has complicated efforts to create a broader coalition against Islamic State (IS) terrorists.

Though some coordination was agreed, and Russia’s President Vladimir Putin said he is ready to cooperate with the U.S.-led coalition against IS, many are skeptical. 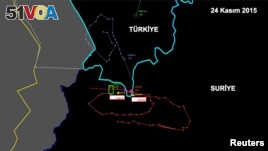 A radar picture shows activities of the downed Russian warplane on the Turkish-Syrian border, November 24, 2015 in this handout photo provided by Turkish Interior Ministry Undersecretariat of Public Order and Security.

“On the ground, practically, we will have this situation of two coalitions fighting the same enemy," said Alexander Baunov of Carnegie Moscow Center. "But at least we need very close coordination of these two coalitions ... just not to create these dangerous collisions as we had. And, of course, not to hit the wrong targets.”

Despite Russia’s claims to be bombing terrorists, most of its targets are non-IS opponents of Syrian President Bashar al-Assad.

But political analysts say Russia’s main goal in Syria is to position itself for negotiations on a much larger scale.

“And, this world order would help resolve the Ukrainian issue, help end anti-Russian sanctions," said Felgenhauer. "And, so this is seen as the most important part of why Russia went into Syria. Of course, keeping Assad in power is important, but the broad coalition is maybe seen as even more important.”

Russia’s alliance with the Syrian government has helped it re-enter the world stage, but it is also the main obstacle to joining a broader coalition against the IS militants.