Update Required To play the media you will need to either update your browser to a recent version or update your Flash plugin.
By Daniel Schearf
Mar 27, 2017
VILNIUS —

Russia's nationalist propaganda machine kicked into high gear after the 2014 annexation of Crimea sparked the worst East-West tensions since the Cold War.

As Russian authorities shrank the space for independent reporting, one group of Russian journalists escaped the pressure by relocating to Latvia's capital, Riga.

“Because, you know, a lot of white noise propaganda creates some kind of fake agenda. And, we want to provide [a] real agenda to our readers,” says Meduza Project founder Galina Timchenko.

In the Baltics, authorities responded to Kremlin propaganda with temporary suspensions for Russian state media that incited unrest. But also by hosting independent Russian media.

“Those Russian journalists who left Moscow, who left [Saint] Petersburg, who left Russia and other cities, and who established their own media outlet here and who are also, to some extent, helping to tackle these propagandas,” says Latvian Foreign Minister Edgars Rinkevics. 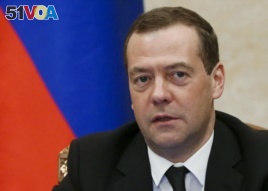 Meduza aims to reach internet-savvy young Russians who, unlike 80 percent of their compatriots, are not yet hooked on state television.

A big focus is using humor to point out absurd politics and alleged corruption.

“And the main thing we're trying to do, we're trying to, you know, make news interesting again, Make News Great Again, for the people in Russia," says Kolpakov.

“We're making fun of Russian politics and Russian government. And, that's where the market is pretty empty, I would say. Because, inside of Russia, it's not advisable for your health reasons to be very critical or even a tiny bit critical of your government,” says Tapinas.

Like Meduza, Tapinas seeks the next generation of Russians who mainly get their information online, but are fed up with nationalist politics and could use a good laugh.