Update Required To play the media you will need to either update your browser to a recent version or update your Flash plugin.
By Lisa Schlein
19 June, 2019


Millions of people in North Korea are short of food, perpetually hungry children and pregnant and nursing mothers are suffering the most.

The World Food Program reports, South Korea's longrun donation, the biggest in more than a decade, will help ease the nutritional crisis faced by 2 million of this particularly vulnerable group of people.

Under an agreement worked out by WFP between both countries, South Korea will donate 50,000 metric tons of rice and $4.5 million in cash for food needs in North Korea. 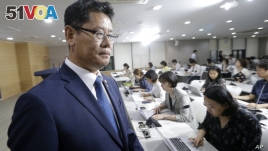 WFP spokesman Herve Verhoosel tells VOA that South Korea's donation indicates the country's political will to help the North at this critical time.

"The South Korean government will assess the way their donation is distributed in North Korea," Verhoosel said, " ... and if they see that it is well organized and that it gives results helping the people in need, then they will potentially take an additional decision for additional support in the future."

An assessment mission by the Food and Agriculture Organization and WFP last month finds more than 10 million people are suffering from severe food shortages, following the worst harvests in a decade.

The agencies report that the nutrition crisis in North Korea is particularly acute in rural areas.  They note rates of chronic malnutrition are as high as 43 percent, and that 1 in 5 children is stunted.

The World Food Program currently is feeding 770,000 people. Verhoosel says WFP would like to scale up its operation to include many more of the 10 million people at risk, but a mammoth operation like that would cost $275 million, and a amount that is far out of reach.

He says WFP has seven principle donors including Canada, France, Switzerland and Russia. He says the United States does not participate in or provide money to WFP's humanitarian operation in North Korea.