Update Required To play the media you will need to either update your browser to a recent version or update your Flash plugin.
By VOA
Dec 23, 2017


Since 1987, the Lord's Resistance Army terrorist group, under the leadership of self-styled prophet Joseph Kony, has waged a guerilla war against the Ugandan government. The group's purported goal is to establish a multi-party democracy that would rule the country according to the Ten Commandments.

According to UNICEF, the LRA has abducted more than 20,000 children to use as soldiers, servants or sex slaves. Its activities in the Central African Republic, South Sudan, Sudan and the Democratic Republic of Congo have helped to destabilize the region and contributed to the violence that has displaced over 2.5 million people. For that reason, the U.S. Treasury Department imposed sanctions on Joseph Kony and the Lord's Resistance Army in March 2016. 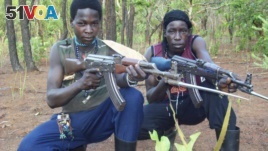 Fighters loyal to the Lord's Resistance Army in the Central African Republic in this handout picture. (File)

The group finances itself in part through elephant poaching and ivory trafficking. To disrupt their revenue stream, the United States Treasury Department has imposed economic sanctions on two individuals who use the illegal ivory trade in support of the Lord's Resistance Army, pursuant to Executive Order 13667. Executive Order 13667 targets those persons who contribute to the conflict in the Central African Republic.

Okot Lukwang is the LRA's intelligence officer. He oversees supply logistics and has coerced civilians to provide him with information on government forces within the region.Lukwang is in charge of selling or trading the group's hoards of ivory.

Musa Hatari, a merchant by profession, has traded with the LRA since at least 2013, supplying the group with ammunition, mines, weapons, food and other supplies. Hatari buys regularly from the LRA, has sold or traded ivory from the LRA, and has promised to trade anything the LRA wants for ivory.

"Treasury will continue to target armed groups such as the Lord's Resistance Army and their support networks that rely on the global ivory trade and wildlife trafficking to finance their violent campaigns," said OFAC Director John E. Smith. "The U.S. government will not tolerate the actions of those who finance destabilizing activities in central Africa, and we appreciate the cooperation of the governments of Sudan and Uganda to degrade the threat posed by the LRA."