Update Required To play the media you will need to either update your browser to a recent version or update your Flash plugin.
By VOA
Nov 26, 2017


In November, the U.S. Department of the Treasury's Office of Foreign Assets Control designated ten current or former Venezuelan government officials associated with undermining electoral processes, media censorship, or corruption in government-administered food programs. This designation follows the October 15, 2017 regional elections in Venezuela, which were marred by a concerted effort by the National Electoral Council, the CNE, to swing the election in favor of the Maduro regime by disenfranchising hundreds of thousands of Venezuelans.

The newest U.S. sanctions target those responsible for denying their fellow citizens their constitutional right to vote and members of the regime complicit in closing democratic space in Venezuela. 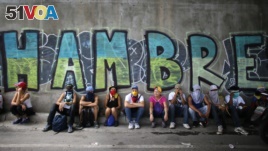 Anti-government demonstrators sit under a bridge that has graffiti written in Spanish that reads "Hunger," during a protest in Caracas, Venezuela, Saturday, July 1, 2017. Demonstrators are taking the the streets after three months of continued protests that has left dozens dead and seen the country's chief prosecutor Luisa Ortega barred from leaving the country and her bank accounts frozen, by the Supreme Court following her mounting criticisms of President Nicolas Maduro. (AP Photo/Ariana Cubillos)

As a result of the U.S. Government's actions, all assets of these individuals subject to U.S. jurisdiction are frozen, and U.S. persons are generally prohibited from dealing with them.

“As the Venezuelan government continues to disregard the will of its people, our message remains clear: the United States will not stand aside while the Maduro regime continues to destroy democratic order and prosperity in Venezuela," said Secretary of the Treasury Steven Mnuchin. "We will maintain our vigorous efforts to sanction Venezuelan government officials who are complicit in Maduro's attempts to undermine democracy, violate human rights, inhibit the freedom of expression or peaceful assembly, or engage in public corruption, unless they break from Maduro's dictatorial regime."