Update Required To play the media you will need to either update your browser to a recent version or update your Flash plugin.
By VOA
Mar 27, 2018


In an effort to limit resources that fuel the civil war in South Sudan, the United States Department of Commerce has imposed licensing requirements on 15 of the country's oil-linked entities whose revenues have contributed to the ongoing crisis in South Sudan. This means that all exports, re-exports, and transfers to these entities of any items originating in the United States, will now require an export license.

According to the World Bank, with oil revenue accounting for almost all of its exports and around 60 percent of its gross domestic product, South Sudan is the world's most oil-dependent country. Through this action, the United States hopes to increase pressure to end the country's five-year-old civil war and the resulting humanitarian crisis. 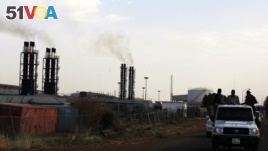 In December 2013, less than 18 months after it declared its independence from Sudan, a power struggle between President Salva Kiir and Vice President Riek Machar spiraled into civil war. The continued fighting has cost the lives of tens of thousands of people, and led to a devastated economy, human rights abuses, hunger, and malnutrition. One third of the population has been displaced by the violence, nearly two million internally and more than two million who have fled to neighboring countries.

“The listed entities are a source of substantial revenue for the Government of South Sudan,” said State Department Spokesperson Heather Nauret.“Unfortunately, the South Sudanese Government, and corrupt official actors, use this revenue to purchase weapons and fund irregular militias that undermine the peace, security, and stability of South Sudan rather than support the welfare and current emergency food needs of the South Sudanese people.”