Update Required To play the media you will need to either update your browser to a recent version or update your Flash plugin.
George Putic
October 28,2015


Chameleons can move their eyes in different directions, and most scientists thought that meant that each eye worked independently from the other. Scientists in Israel say they have discovered, however, that chameleons’ eyes are, in fact, highly coordinated.

Many fish and birds have eyes on opposite sides of the head, and they seemingly have at any given moment two different pictures of the world around them. But chameleons’ eyes are slightly bulging so they can focus both eyes on one object or track two different objects with each eye.

The puzzling question was: does one eye know what the other is doing?

Scientists at Haifa University, in Israel, tried to find the answer with the help of a computer screen. 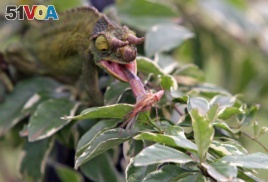 File - A three-horned "Chameleo Jacksonii" chameleon feeds on an insect at the Old World Kinyonga reptile farm in the Karen area of Kenya's capital Nairobi.

When the picture of an insect projected on the screen was split in two, which then started to move in opposite directions, the chameleon was able to follow both.

But when the animal finally decided on one of the targets, its other eye suddenly swiveled back to focus on the same spot. In a split second, it lashed out its long tongue at the target. This proved that the second eye knew what the first eye was seeing.

"We assume that the brain controls each eye independently with independent units of eye movements, but there is a higher level of control that can co-ordinate these two. So each eye knows exactly what the other eye sees and vice versa,” said Ketter-Katz.

Scientists say new findings may shed new light on research on other, similar animals. It also could find application in the control of mechanical devices — such as robots or self-driving cars — whose video cameras have to focus simultaneously on several things.