Update Required To play the media you will need to either update your browser to a recent version or update your Flash plugin.
By VOA
Jun 27, 2017


UN officials recently discovered a tunnel built by Hamas underneath two schools run by the UN in Gaza. In an address to the Security Council, U.S. Ambassador to the United Nations Nikki Haley said that the discovery again shows Hamas' true colors:

“Tunnels in heavily populated civilian areas are its signature. Hamas hides military infrastructure in and around apartment buildings, hospitals... Hamas consciously plots and plans to attack civilians, and it uses the cover of civilian building to launch those attacks. It is a sick and cynical strategy.” 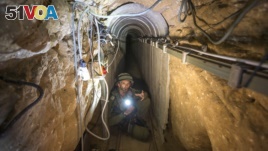 The United States remains a strong supporter of Gaza's recovery and reconstruction.

Ambassador Haley noted the dire humanitarian crisis in Gaza, and said the United States remains a strong supporter of Gaza's recovery and reconstruction. But, she emphasized, it is Hamas which has controlled Gaza for the past decade and is squandering its enormous potential.

“Make no mistake, Israel did not cause the problems in Gaza...Ten years ago, every Israeli soldier was withdrawn from Gaza, and for the last 10 years, there has not been a single Israeli settler in Gaza.”

After a decade of Hamas rule, life for the people of Gaza is worse than ever before, said Ambassador Haley:

Ambassador Haley pointed out how much the Palestinians in Gaza need concrete to rebuild their homes. “But here, in this tunnel,” she said, “we see how Hamas uses the concrete Gaza receives – not to help the people, but to fortify its terrorist infrastructure.”

The Security Council “must stand up to condemn Hamas' terror,” said Ambassador Haley.

“We need to pressure Hamas to end its tyranny over the people of Gaza...We should name Hamas as the group responsible when rockets are fired from Gaza, or when fresh tunnels are discovered. And we should designate Hamas as a terrorist organization in a resolution, with consequences for anyone who continues to support it.”

That is how the Security Council can fulfill its responsibility to maintain international peace and security, Ambassador Haley said. “Address the real threat that is causing so many people harm,” she urged, “the threat of Hamas.”