Update Required To play the media you will need to either update your browser to a recent version or update your Flash plugin.
By VOA
Jul 12, 2017


The UN Secretary General recently released his biannual report on implementation of UN Security Council Resolution 2231. In it, he confirmed that all parties, including Iran, are living up to their commitments under the Joint Comprehensive Plan of Action, the nuclear deal agreed to by Iran, the EU and the P5+1 countries.

But when UN Under-Secretary General for Political Affairs Jeffrey Feltman presented the report to the Security Council, he focused on the resolution's other provisions as well, one of which calls on Iran to refrain from activity related to ballistic missile development. He noted that on January 29, 2017, Iran launched a medium-range ballistic missile, and that that had followed a series of earlier ballistic missiles launched by Iran in March 2016. 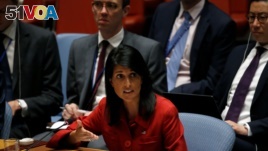 The sanctions outlined in Resolution 2231 also restrict Iran's arms transfer and export. UN Under-Secretary Feltman reported that after analysis of a cache of weapons seized by the French navy in the Northern Indian Ocean in March 2016, it was determined that the weapons were of Iranian origin and had been shipped from Iran. In addition, Mr. Feltman noted that Iran's Defense Ministry Organization again participated in Iraq's Defense Exhibition.

U.S. Ambassador to the UN Nikki Haley said the Secretary General's report “is filled with devastating evidence of the nature of the Iranian regime” and documents the Iranian government's actions in defiance of Resolution 2231.

She also observed that while Resolution 2231 requires states to prohibit the entry into their territory of certain individuals like Major General Qassem Soleimani, chief of the IRGC's Qods Force, he has openly visited other countries.

“We as the Security Council must stand behind the provisions of 2231. We must strictly enforce them and show Iran that we will not tolerate their egregious flouting of UN resolutions.”

The United States will do its part to implement Resolution 2231. It will also work with global partners to interdict prohibited cargo and continue to impose U.S. domestic sanctions on those who help Iran violate Resolution 2231.

Iran's behavior and rhetoric are not those of a responsible member of the international community, said Ambassador Haley. “The Security Council must recognize this fact and act accordingly.”