Update Required To play the media you will need to either update your browser to a recent version or update your Flash plugin.
By VOA
Aug 18, 2017


Earlier this month the Security Council unanimously adopted a resolution aimed at preventing terrorists from acquiring weapons, as well as the parts for improvised explosive devises, whose use is a growing problem.

Resolution 2370, (reaffirming Security Council Resolution 1373 adopted in 2001), calls on all Member States to refrain from providing any form of support to those involved in terrorist acts, including by stopping their supply of weapons. 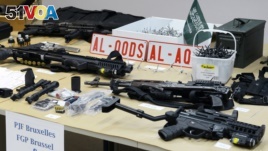 Belgian police displayed an arsenal they say was found in the home of a suspected terrorist. (File)

In a briefing after the vote, U.S. Ambassador to the United Nations Nikki Haley noted that terrorists have many ways to get their hands on dangerous weapons: by diverting legal weapons transfers; taking advantage of poorly secured stockpiles; seizing weapons on the battlefield; and procuring them through criminal networks.

Resolution 2370, she said, urges all states to strengthen export controls and help other countries destroy excess weapons. It emphasizes the need for enhancing the security of weapons stockpiles and highlights the murderous potential of improvised explosive devices. Most importantly, it calls attention to the obligation of all nations to enforce UN arms embargos.

Ambassador Haley noted that recently progress has been made against ISIS and al Qaida; but, while the Council has prohibited arms transfers to Yemen and Somalia, among other places, weapons continue to flow across borders in open violation of Security Council resolutions. This, she said, “is an unacceptable stain on this Council that must be removed.”

“One country stands out for its deliberate, systematic contributions of weapons, training, and funding for terrorist groups,” as well as for “its support for terrorist proxies,” said Ambassador Haley. “That country is Iran.”

Ambassador Haley recalled that the United States designated Iran a State Sponsor of Terrorism in 1984 and declared that Iran's “training, funding, and arming of terrorists have continued unabated to this day.” She pointed to Iran's terrorist proxies in Iraq and Syria; its support for Hamas and Bahraini terrorist groups; its partner Hezbollah's build-up of weapons and battle-hardened troops in Lebanon in preparation for war.

The United States will continue to raise this issue of Iranian non-compliance at every opportunity, said Ambassador Haley. “As long as we allow the Iranian regime to violate this Council's prohibitions with impunity, it will be a source of weapons to terrorist groups that will only grow in volume and destructive capability.”