Update Required To play the media you will need to either update your browser to a recent version or update your Flash plugin.
Brian Padden
May 29,2015


SEOUL— Although relations between the two Koreas have deteriorated over the North’s nuclear program, past military provocations and human rights abuses, many Koreans still hold out hope for eventual peaceful re-unification. A “unification fair” was held this week in Seoul, where border communities promoted the benefits of increased cooperation and North Korean defectors shared their stories of assimilating into the South.

Shin Eun-ha, a North Korean defector, became famous in the South after being featured on a television dating program. Her message for all Koreans who come to this event organized by South Korea’s Unification Ministry is that what unites them is stronger than the governments and ideologies that divide them.

“I would like to tell South Koreans that love, happiness and hope also exist in North Korea,” she said.

Over 160 civic groups, businesses and local governments set up exhibits in the heart of Seoul to voice support for ending the division of the Korean peninsula.

Korea was split 70 years ago, at the end of World War II, and the two Koreas remain on wartime footing since their war in the 1950s. Relations have deteriorated since 2010, when Seoul accused Pyongyang of sinking a South Korean warship.

South Korea’s imposed sanctions on the North - called the May 24th measures - included ending a local Kyungsang province project that sent thousands of strawberry plants across the border each year.

Kwon Moon-soo of the Kyungsang agriculture association said it is time to lift these restrictions.

“This year marks the 70th anniversary of the division and reunification is becoming more difficult as the years pass,” said Kwon. 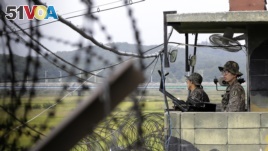 FILE - South Korean army soldiers stand guard at a military check point at the Imjingak Pavilion near the border village of Panmunjom, which has separated the two Koreas since the war.

Kangwon Province is the only divided province on the Korean peninsula. South of the border the province will host the 2018 Winter Olympics. To the North lies Mt. Keumgang, which was a special joint tourist zone until 2008, when the killing of a visitor by North Korean soldiers ended the venture.

“Even though the tours have been stopped, if they resume, it will be meaningful for the economy and significant for the reunification effort," said Kim.

Pyongyang has repeatedly rejected Seoul’s offers to talk about unification, saying the economically advanced South only wants to absorb the impoverished North. While high-level negotiations have stalled, many here hope restarting local projects may help bring a peaceful resolution to the seven-decade standoff.