Update Required To play the media you will need to either update your browser to a recent version or update your Flash plugin.
By VOA
Dec 5, 2016

When such an individual is identified, the U.S. Government places that person's name on the Specially Designated Nationals List. His assets within U.S. reach are immediately frozen, and he is locked out of the global financial network. No U.S. citizen or company may conduct business with a designated individual. 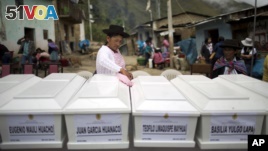 Shining Path, which has been engaged in terrorism since 1980, is a violent off-shoot of the Communist Party of Peru. Its stated intent is to violently overthrow the country's long-standing democracy and replace it with a Maoist-style dictatorship. It employs intimidation, assassination, and particularly brutal and murderous attacks on civilians to achieve its aims. These terrorists have massacred entire villages. This includes, among others, Lucanamarca, where 69 people were massacred in 1983, and the subsequent Hauyllo massacre that killed 47.

Shining Path finances itself through the cocaine trade. It taxes the cultivation, processing, and transit of cocaine. It also provides transport and armed security to narcotics trafficking organizations moving large cocaine loads through and out of south central Peru.

Tarcela Loya Vilchez is in charge of the military training and ideological indoctrination of children. She is known to have trained new Shining Path members – often child soldiers -- to serve as reinforcements in the group's terrorist operations.

For these and other reasons, all three have been designated by the U.S. Department of State as Specially Designated Global Terrorists under Executive Order 13224.

Since 1980, Peruvians have strongly rejected the Shining Path, and what is left of the organization has evolved into little more than a violent criminal narco-terrorist gang. By now designating its remaining leadership, the United States hopes to disrupt the group's ability to continue its nefarious activities.