Update Required To play the media you will need to either update your browser to a recent version or update your Flash plugin.
By VOA
Sep 6, 2017


Azerbaijani authorities have arrested Mehman Aliyev, editor-in-chief of Turan Information Agency, and sentenced him to three months of pre-trial detention pending trial on charges of tax-evasion and abuse-of-power. 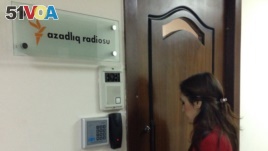 U.S. State Department spokesperson Heather Nauert said, "We are deeply troubled by the August 24 arrest and three month pretrial detention of Mehman Aliyev, the prominent editor-in-chief of Azerbaijan's only remaining independent media outlet, Turan Information Agency. Other restrictive actions against Turan, include freezing its bank accounts and initiating tax evasion charges against it, are also troubling."

"These actions by the government of Azerbaijan to curtail freedom of press and to further restrict freedom of expression," said Ms. Nauert, "are the latest in a negative trend that includes the government's May decision to block access to Radio Free Europe/Radio Liberty and other independent media websites."

The United States urges the government of Azerbaijan to immediately release Mehman Aliyev, and all those incarcerated for exercising their fundamental freedoms, in accordance with its international and OSCE obligations.