Update Required To play the media you will need to either update your browser to a recent version or update your Flash plugin.
Joe DeCapua
August 21,2015


Thursday night (8/20) on a beach in Freetown, Sierra Leone, a candlelight vigil was held for a teenager found murdered last week. The death has sparked outrage in the country and concern about rising crime in the wake of the Ebola epidemic.

The body of 17 year old Hannah Bockarie was found earlier this month on the well-known Lumley Beach. Tests will determine whether she was sexually assaulted, but police and a women’s group say it appears she was. She may have been beaten to death.

Nicky Spencer-Coker is spokeswomen for PowerWomen232, a group of professional women that organized the vigil. She said outrage over the teen’s death erupted when a picture of her body was circulated on social media. 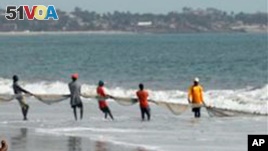 Lumley Beach in Freetown, Sierra Leone is a popular attraction. The body of 17 year old Hannah Bockarie, who was murdered, was found there in August 2015.

“This young person, who clearly had died violently, now being violated and victimized a second time by her picture being circulated throughout social media. So, this does not seem like something that we should sit by and allow to go unreported on, unspoken about. It needed to be something that we needed to raise our voices about to let people know that it wasn’t OK with us as citizens of this country, as women, to allow something like this to unchallenged.”

She said circulating the picture of the crime scene disrespected who Bockarie was.

“That was somebody’s child. Somebody’s sister. Somebody’s daughter. And her young life was cut short in a fairly brutal manner, whether or not she was raped. So, we held this candlelight vigil and march. We’re very, very happy about the fact that we’ve received so much support and involvement from various individuals and organizations -- because it means that something we hope will be done. Not just for Hannah, but for other victims of violence and sexual assaults in Sierra Leone,” she said.

She said that police and civil society groups reported an increase in crime, including sexual assaults, as Ebola strained government resources. However, no official figures are available yet.

Spencer-Coker said, “I think it was incumbent on us as citizens to put pressure on the police, on the security forces to ensure that if they need to pressure somebody else to get what they need to ensure that we, as citizens, are protected, that they do so. There have been reports of an increase of attacks on people along certain tourist attractions. The police have been responding in terms of increased checkpoints and making the public aware. But clearly more needs to be done.”

“Social media really can be a tool for good or ill. And this is not the first time that something like this has been reported. In fact, since we started raising our voices on this particular case, people are coming forward and saying, well, this has happened and that had happened. What was most disturbing was the fact that her picture was so widely shared in social media outlets. And it just bothered people no end. She didn’t deserve to die the way she did and she didn’t deserve to have her picture distributed the way it was.”

She said Hannah Bockarie was not a street child. She had family. She had friends. The vigil was held on the eve of her 18th birthday.