Update Required To play the media you will need to either update your browser to a recent version or update your Flash plugin.
By VOA
Dec 7, 2017


The two weeks between International Day for the Elimination of Violence against Women, observed on November 25th, and Human Rights Day, celebrated on December 10th, are dedicated to 16 Days Of Activism Against Gender-Based Violence: 16 days of campaigning around the world to challenge and raise awareness of gender-based violence, and mobilizing people everywhere to bring about change.

Gender-based violence is directed against individuals because of their actual or perceived biological sex or gender identity. It may be, and at times is, aimed at boys and men, but because most cultures confer lower social status on females, thereby creating an unequal power dynamic, women and girls are more likely than men and boys to be sexually or physically assaulted. 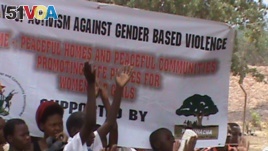 Some children mark 16 Days of Activism Against Gender Based Violence. (Photo: VOA)

Gender-based violence crosses every social and economic class, ethnicity, race, religion, and education level, and transcends international borders. It is perpetuated by the failure of governments and societies to recognize and value the human rights of women and girls, even though such discrimination causes harm to society as a whole.“We know that violence against women and girls undermines global peace and security,” said Secretary of State Rex Tillerson.“It weakens the social fabric that binds families and communities together and prevents countries from achieving social stability and economic development.”

International Day for the Elimination of Violence Against Women and the accompanying 16 Days of Activism Against Gender-Based Violence are observed by the international community in order to shine a light on this scourge.

“We continue to recognize that violence against women remains a persistent threat and an obstacle to achieving women's equality. The United States is especially alarmed by violent extremist groups' use of violence against women as a tactic of terror to suppress women, recruit terrorists, and stigmatize communities. We denounce terrorist organizations' use of forced conscription, sexual exploitation, and abuse, including sex trafficking of women and girls,” said Secretary of State Tillerson.

“The United States will never waver in its support for women's equality. In partnership with governments, international organizations, and civil society around the world, we will continue to work to end violence against women and girls globally and to ensure that women and girls have equal rights and opportunities.”