Slavery, a Heinous Crime and the Ultimate Human Rights Violation

Update Required To play the media you will need to either update your browser to a recent version or update your Flash plugin.
By VOA
Dec 26, 2017


For the flood of migrants and refugees escaping the violence and poverty of several African countries and heading toward Europe for the opportunity of a better life, the most common route out of North Africa is through Libya.They present targets for people and criminal groups who prey on migrants. “Their brutality knows no bounds: sexual exploitation, forced labor, the removal of bodily organs and slavery are the tools of their trade,” said UN Secretary-General António Guterres.

The migrant crisis in Libya received international attention once again following the recent report by CNN on African migrants being sold as slaves in unidentified locations across the country. Migrants were reportedly sold for as little as 200 U.-S. dollars. 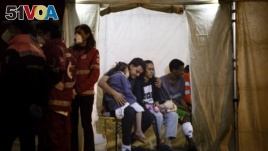 Migrants who are smuggled can be extremely vulnerable to human trafficking, abuse, and other crimes, as they are illegally present in the country of destination or country of transit and often owe large debts to their smugglers. Some smuggled persons may be subjected to sex or labor trafficking while in transit or at their destination.

The Libyan Government of National Accord, the GNA, launched an investigation into the allegations of trafficking in persons and pledged to hold perpetrators accountable. The United States strongly supports these efforts and we view the GNA as a vital partner in combatting human trafficking. The United States also continues to contribute to assistance programs that support the humanitarian needs of refugees, migrants, and individuals in detention in Libya.

The United States works to combat human trafficking by focusing our efforts on the “3P” paradigm of: prosecution, protection, and prevention. We are funding research into the connection between conflict and vulnerability to human trafficking to help us understand how to better prevent this crime from happening in the first place. We hope to protect victims by immediately identifying them in conflict situations and assisting them. And we hold traffickers accountable by prosecuting them.

“We believe a victim-centered approach to investigation and prosecution of human trafficking is critical to overall success of law enforcement efforts. This includes commitments by states not to prosecute trafficking victims for acts committed as a direct result of being subjected to human trafficking,” said U.S. Permanent Representative the United Nations, Nikki Haley. “We will continue to work with [the UN Security] Council and with partner governments to end this barbaric assault on human dignity.”