Update Required To play the media you will need to either update your browser to a recent version or update your Flash plugin.
By VOA
Dec 28, 2017


Lack of inexpensive, reliable energy delivery is one of the chief obstacles to growth and development in sub-Saharan Africa. Nearly seventy percent of people living in the region lack access to electricity, forcing them to spend significant amounts of their income on costly and unhealthy forms of energy such as diesel fuel to run generators and kerosene for lanterns.

But if there is one thing Africa is not lacking, it is sunshine. And that means a lot; indeed, for some of the world's poorest people, it makes all the difference in the world. 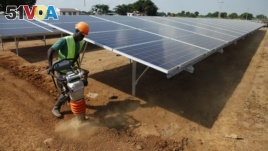 A Ugandan worker builds a solar plant in Soroti about 300 kilometers east of Uganda capital Kampala.

A little more than a year ago, Power Africa-- a U.S. Government initiative coordinated by the U.S. Agency for International Development, or USAID--and Power Africa's partners, the United Kingdom Department for International Development, Shell Foundation, and the African Development Bank, launched the Scaling Off-Grid Energy Grand Challenge for Development, with a focus on pay-as-you-go solar home systems. The Challenge's goal is to provide 20 million off-grid households in sub-Saharan Africa with clean, affordable electricity by 2030. So far, the Challenge has made 40-plus investments in early-stage, off-grid energy companies, which are expected to result in some 4.8 million new electrical connections.

One reason for the success of the start-up companies that have won grants from the Challenge is the fact that the cost of solar technology is falling fast, so it is within the means of those who live away from traditional power grids. And thanks to the new system of mobile money and pay-as-you-go financing, they can purchase the solar power-generating equipment they need and pay for it in daily installments from their telephones, for as little as 15 cents a day.

Thanks to these technological and financial innovations, many people are getting electricity for the first time, every day. In these newly-electrified communities, businesses can flourish, clinics can safely store vaccines, and students may study long after dark. Indeed, access to clean and reliable electricity can enable entire communities to escape the cycle of extreme poverty.

The Scaling Off-Grid Energy Grand Challenge for Development partnership, solar technology, and companies that bring light and electricity to off-the-grid homes and businesses, are revolutionizing daily life for millions of people in sub-Saharan Africa.