Update Required To play the media you will need to either update your browser to a recent version or update your Flash plugin.
Henry Ridgwell
April 28,2016


LONDON— The Islamic State militant group claimed its first ever attack in Somalia earlier this week, though the claim has not been verified. Meanwhile, al-Shabab militants have stepped up their attacks as Somalia gears up for elections later this year.

The situation has led to growing frustrations among Somalia’s Western backers over the country’s slow progress in establishing its armed forces to bring security, after 25 years of chaos.

Somali authorities say they are countering a resurgence from al-Shabab rebels after years of progress in driving back the militants. Abdihakim Mohamoud Haji-Faqi, the country’s defense minister until 2014, attributes this to strategic changes on the part of the militant group.

“Al-Shabab has changed strategically their operations, from face-to-face fighting to targeting military bases, or targeting civilians, such as hotels, so they can terrorize the civilian population,” Haji-Faqi said.

That has included a series of suicide attacks in recent weeks, many of them targeting government figures in the capital, Mogadishu. 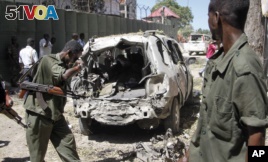 FILE - Security forces inspect the scene of a car bomb attack in the capital Mogadishu, Somalia, April 11, 2016. A car bomb exploded outside a restaurant packed with lunchtime customers, killing at least five people according to witnesses.

Analyst Cathy Haenlein of Britain’s Royal United Services Institute says al-Shabab has been extending its reach across east Africa as it has lost territory in Somalia.

“So we have seen it exert a much greater level of influence in Kenya for example, there are much higher levels of recruitment and fundraising going on in Kenya,” Haenlein said.

Kenya recently marked the first anniversary of the Garissa university attack, when al-Shabab gunmen killed 148 people. Kenya is one of the main contributors to the African Union peacekeeping force, known as AMISOM.

After initial territorial gains, Somali authorities say AMISOM forces have been largely confined to their barracks for the past year. Haenlein said this is in part due to certain suspicion surrounding the peacekeepers.

“It is having problems holding onto and establishing a presence in the territories that it has retaken. In Somalia, especially, there is a suspicion about what the troop contributing countries’ interests are in the country, and that they may not be operating for the greater good of Somalia,” Haenlein said. FILE - African Union Mission in Somalia (AMISOM) peacekeepers patrol after fighting between insurgents and government soldiers erupted on the outskirts of Mogadishu, May 22, 2012. Frustrated with the force, the European Union recently cut monthly stipends it pays to AMISOM soldiers.

Somalia’s Western backers, including the United States, have been effectively paying the wages of Somali government troops. The European Union recently cut the monthly stipend it pays to AMISOM soldiers. Former defense minister Haji-Faqi says it is vital the support continues.

“They need support by the international community because the government financially is not in the position to pay their salaries and to arm their military. And also to lift the arms embargo against the Somali national army,” Haji-Faqi said.

The United States has carried out a series of drone strikes against al-Shabab militants. The Somali government has welcomed the intervention and warns of a growing threat in the run up to elections scheduled later this year.