Update Required To play the media you will need to either update your browser to a recent version or update your Flash plugin.
Joe DeCapua
December 31,2014


The year-long conflict in South Sudan has taken a heavy toll on the population through malnutrition, death and displacement. But the U.N. Food and Agriculture Organization says millions of cattle have also been displaced, raising concerns over disease outbreaks and tensions between pastoral groups.

Dr. Sue Lautze said, “The FAO is “quite concerned, not only about the livestock, but the millions of people who rely on the animals for their livelihoods.”

Lautze is the U.N. agency’s Representative to South Sudan. From Juba, she spoke to VOA about the crisis just over a year since the conflict began.

“When people ran they also ran with their cattle. And they did everything they could to try and find a place to survive a tremendous amount of violence. And the running has gone on all year, both for the people and for the cattle.”

As a result of the conflict, she said the normal patterns of cattle migration were disrupted. 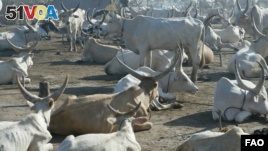 The U.N. Food and Agriculture Organization says the displacement of millions of cattle and other livestock in South Sudan poses greater disease and violence risk. ?UN/Isaac Billy Gideon / FAO

“When the rains end the pastoralists will move their cattle and their goats and their sheep towards the water sources where there is good grass and water to be had. And then when the rains come back they can disperse across a wide part of this country to again be in pursuit of good pastures. So what we have now though is people just going anywhere with their livestock, including into areas where there are people farming. So, we have conflicts between the livestock owners and the farmers, who don’t want the cows to come in and eat the sorghum, which is understandable,” she said.

She said the situation could destabilize some communities that have, so far, been able to refrain from violence. However, she said, in some parts of Sudan, cattle-related violence has reached unprecedented levels. One such area is Lakes State.

Lautze said, “The kind of violence that we’re seeing there normally would be contained by the security forces if this was a normal year because there are a lot of tensions. There’s a lot of competition for resources between groups as they move toward pastures, toward water, toward even areas where they need to do salt licks for the livestock. Many times it’s the governors of the states that are holding peace conferences. But because so much of the political and security apparatus is engaged in a different problem – the problem of the ongoing fight-- that we see these types of fights erupt without any control on them.”

Following the Comprehensive Peace Agreement in 2005, herders were able to move their cattle to places they had not been before. That migration introduced livestock diseases, such as East Coast Fever, to new areas. It’s a tick-borne disease that can quickly kill young cattle.

“We’re now seeing as a result of this crisis unprecedented expansion of diseases like East Coast Fever, in addition, we’re seeing some of the diseases that come when livestock can’t move normally, particularly when they get stuck in water logged areas. We begin to see issues of rot, foot rot. We begin to see issues of liver flukes that the livestock owners would normally know how to avoid if they could move properly. So the livestock teams for FAO, our partners, the Red Cross, governments have been super busy and I don’t think we’re actually able to keep pace just yet,” she said.

The cattle displacement and the disease risk it poses also is a threat to South Sudan’s food security.

Lautze said, “Here in South Sudan the livestock generally are not slaughtered for meat, unless it’s for maybe a big wedding or in case of really dire emergencies, which unfortunately we have right now. Most of the time it’s the milk products from the livestock. When the cattle herds are not near families because they’re having to move away – when the livestock are sick and they’re not producing as much milk – then we start to see a real impact on the nutritional status of pregnant and lactating women – of young children – of youth, boys and girls of school age.”

The ability to farm in South Sudan has also been restricted or curtailed in areas if conflict.

The FAO Representative said there is a solution to the problems.

“South Sudan needs peace. There is no greater contribution to the health and welfare, the prevention of a deteriorating food security crisis. There’s nothing more important than peace.”

Nevertheless, Lautze said the FAO and its partners are preparing to expand operations. The agency is asking for about $90 million. She said the donors have been generous and in 2014, FAO programs reached nearly three million people.