Update Required To play the media you will need to either update your browser to a recent version or update your Flash plugin.
Joe DeCapua
February 03,2015


A rights group is criticizing the African Union for delaying release of a commission of inquiry report on South Sudan’s conflict. Human Rights Watch says the AU should reverse its decision and immediately publish the findings.

HRW Africa Director Daniel Bekele says the AU has “put justice on hold” in South Sudan. Deferring action on the report, he says, “casts doubt” on the AU’s commitment to its first ever commission of inquiry. The commission was chaired by former Nigerian President Olusegun Obasanjo. 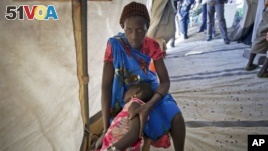 In this Dec. 31, 2013 file photo, Nyanhial, 5, is comforted by her mother as she is treated for fever and vomiting at a Doctors Without Borders medical tent in the Jebel area on the outskirts of Juba, South Sudan. Human Rights Watch says the more than year long conflict has taken a heavy toll on civilians. HRW calls on the AU to release its commission of inquiry report on the conflict. (AP Photo/Ben Curtis, File)

He said serious crimes, including war crimes, have been committed in South Sudan since December 2013.

“So the full facts need to come out and those that are responsible for these atrocities need to be held to account. It is crucial that findings and recommendations of the commission of inquiry need to be made public.”

A power sharing deal was signed February 2nd between South Sudan President Salva Kiir and former vice-president Riek Machar. Many details need to be worked out. However, if successful, the agreement would form a transitional government of national unity and end fighting early next month. It raises the question whether the AU delayed the commission of inquiry report so as not to jeopardize peace talks.

“That seems to be the assumption with the peace negotiators and some of the African Union officials. But we believe that assumption is rather misplaced. We don’t think that a peace process and a justice process are mutually exclusive,” he said.

The Human Rights Watch official said that “failing to take action on justice will embolden perpetrators to commit more abuses.”

Bekele said the international community has been awaiting the report’s release before taking action on justice in South Sudan.

“This relates to what is the best mechanism and model to hold perpetrators to account. And there seems to be an understanding that probably South Sudan needs a hybrid court, which consists of South Sudanese, as well, as international members. To establish a judicial body, which consists of an investigative unit, a prosecutorial unit and how you provide protection for witnesses.”

Bekele said the “AU has taken precious time and resources to document crimes,” adding “this effort can do little good if it does not see the light of day.”