Update Required To play the media you will need to either update your browser to a recent version or update your Flash plugin.
By VOA
Sep 9, 2016


For a while, it looked like the two and a half-year-old civil war in South Sudan might finally be over. In August of last year, both Salva Kiir and Riek Machar signed a peace agreement to end the conflict, the terms of which confirmed Salva Kiir as President and returned Riek Machar to government as the First Vice President.

But just months after Riek Machar returned to South Sudan to resume his vice-presidential duties, violence resumed and Machar fled.

One of the most heinous aspects of South Sudan's civil war is the forced conscription of child soldiers—children younger than 18, with far too many under the age of 15. According to UNICEF, the United Nations' children's agency, since South Sudan's civil war began in December 2013, over 16,000 children have been recruited into armed groups on both sides. 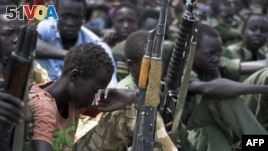 FILE - Boys with their rifles sit at a ceremony of the child soldiers disarmament, demobilization and reintegration in Pibor, Jonglei State, South Sudan.

UNICEF has reported on the recruitment of child soldiers since the July 7 outbreak of violence. Both sides are using various methods, including coercion and blackmail, to force parents to surrender their children to them.

The United States is profoundly alarmed by the UNICEF report. “Above and beyond our calls for an end to ongoing violence in South Sudan, we insist on an immediate halt to the unlawful recruitment and use of child soldiers by government and opposition forces. Individuals responsible for the unlawful recruitment or use of child soldiers for armed groups or forces may be subject to sanction under U.S. law and may be targeted for UN sanctions,” said State Department Spokesman John Kirby in a written statement.