Update Required To play the media you will need to either update your browser to a recent version or update your Flash plugin.
Jason Patinkin
June 14,2016

He took the stage at a nightclub in Juba the day after soldiers stormed another venue to stop his performance. On another occasion, his fans had to smuggle him out the back of a venue to avoid arrest.

Lual is one of South Sudan's most popular rappers. Raised in the United States, he returned to what was then southern Sudan in 2009 in hopes of helping the country grow. 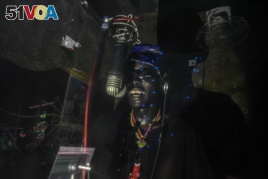 South Sudanese rapper Lual D'awol records a track in a recording studio in Juba, June 4, 2016. D'awol uses his music to speak out against a government that has a reputation for silencing dissenting voices. (J. Patinkin/VOA)

South Sudan got its independence two years later but has known little besides war, poverty and corruption since.

Lual’s lyrics push the boundaries of free speech in a country where perceived government critics have been jailed, beaten or killed.

The government banned one of Lual's most popular songs, "Dowla Jadit," from playing on local radio stations.

“Dowla Jadit” means “New Nation” in the local Arabic language. In the song, Lual criticizes local officials who he says always reply, “We are a new nation,” as an excuse for the lack of public services like water and electricity. Lual said he received death threats after releasing the song.

"It is just people trying to rattle me, trying to scare me, and trying to get me to sing things that make no sense, or talk about falseness and fake things that are not really happening, clubbing and what, but that is not the reality in South Sudan," he said.

Lual said he would not give in to intimidation.

"I just have to be myself," he said. "I cannot change for any intimidation or any fear, because you only live once and I cannot live like a coward, you know?"

With South Sudan emerging from a 2½-year civil war that has divided the country by tribe, Lual said he wanted to preach unity. 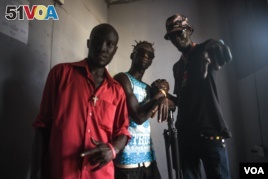 "Music brings people together ... and that is what we need right now, this time of peace and reconciliation," he said. "We need to unify, and have that nationhood, that love for South Sudan, you know? Because we are all South Sudanese at the end of the day."

He is working on a new album, collaborating with producers and singers from the country’s various ethnicities.