South Sudan - The Most Dangerous Country for Aid Workers

Update Required To play the media you will need to either update your browser to a recent version or update your Flash plugin.
By VOA
Sep 11, 2017


The people of South Sudan are experiencing the world's worst food security crisis, one caused not by drought or flood, but by man-made conflict: a power struggle between President Salva Kiir and former Vice President Riek Machar that spiraled into a civil war in late 2013.

Famine was declared in part of South Sudan in early 2017, but with quick action on the part of the international community, including the United States, famine was alleviated four months later. However, the overall food security situation in South Sudan remains dire with more than half the current population—6 million people—facing life-threatening hunger this year. 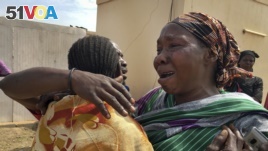 FILE - Relatives of the six aid workers who were ambushed and killed grieve as they wait to collect and bury the bodies of their loved ones, outside the morgue in Juba, South Sudan.

The United States is the biggest donor to the massive humanitarian effort in South Sudan. Since 2013, we have contributed nearly 2.7 billion dollars in humanitarian assistance for the South Sudanese people, including those who have fled to neighboring countries. 729 million dollars has been provided in 2017 alone.

In South Sudan, one of the biggest obstacles to delivering emergency aid is gaining access to those in need in one of the most difficult and expensive countries in which to deliver assistance.

South Sudan is also the most dangerous country in the world for aid workers. Since the conflict began in December 2013, 85 aid workers have been killed. According to the United Nations, nearly 630 incidents hindering humanitarian access occurred between January and July of this year. Some 36 percent of them involved violence against humanitarian personnel, assets, or civilian infrastructure. So far this year, 27 security incidents have forced around 300 relief workers to relocate from areas of operation. At the same time, humanitarian aid organizations have complained that their movements are often restricted, often by the government.

During a visit to South Sudan on September 2, USAID Administrator Mark Green said: “While it is true that we support the people of South Sudan, it is just as true that the situation has deteriorated to the point where a serious re-examination of U.S. policy is appropriate.”

We urge President Kiir and his Government to both acknowledge and address the worsening humanitarian crisis in South Sudan, restore a permanent ceasefire by ceasing ongoing military offensives; end obstruction of humanitarian access; eliminate exorbitant fees levied on aid organizations; and engage in a meaningful, inclusive peace process.