Update Required To play the media you will need to either update your browser to a recent version or update your Flash plugin.
Jason Patinkin
June 12,2016


JUBA— In Juba, South Sudan, veterans of the 22-year-long civil war with Sudan meet once a week to play wheelchair basketball. Disabled people in South Sudan face discrimination, high rates of substance abuse and unemployment, but these men show what else is possible.

The men meet at Juba Basketball Stadium every Tuesday. Some are war veterans with missing legs. Others were stricken by polio.

But all of them are athletes. These are players in South Sudan's Wheelchair Basketball Association. 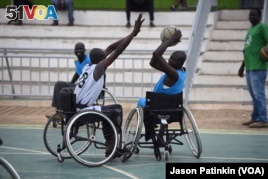 A wheelchair basketball player tries to block a pass by an opponent at a basketball court in Juba, South Sudan, May 24, 2016.

Gatluak Kual Luak helped found the team in 2011. He lost his leg as a soldier in the Second Sudanese Civil War in 2000. Like many others, he learned the sport as a refugee in Kenya.

"Wheelchair basketball, it is not easy game. It is very technical," he said. "You need a lot of courage. You need a lot of mind. Let me say, you have to be committed. It has changed [the] bigger part of disability in me to ability. I realized that I can do anything like other people. Disability is not inability."

It's not only veterans who participate. James Amule got polio when he was two years old. He says disabled people are passed over for jobs in South Sudan and are called "abukarang" — a slur.

Already, the sport is changing attitudes.

The South Sudan Basketball Federation hopes the team will compete at this year's Paralympics in Brazil.

"Everybody will be cheering them, and that will give them a pride and a sense of representing their country," said Malik.

For now, though, the team wants to grow the sport at home.

"We are approaching everyone out [there] to have that courage and play wheelchair basketball so that they also begin a new life, and they realize that they can still do something,” said player Gatluak Kual Luak.

For a nation in need of healing, this sport could be an example of how to move forward.