Update Required To play the media you will need to either update your browser to a recent version or update your Flash plugin.
Mike O'Sullivan
July 24,2015


LOS ANGELES— More than 6,000 athletes from 165 countries have gathered in Los Angeles for the Special Olympics, a competition for people with intellectual disabilities. 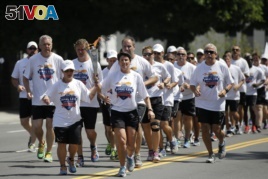 The Special Olympics torch, called the Flame of Hope, is nearing the end of its journey of thousands of kilometers.

It is part of a fundraising effort for the Special Olympics movement by law enforcement agencies.

The opening ceremony for the games will be held at the opening site of the 1984 Summer Olympics, the Los Angeles Coliseum, where Olympic gold medalist Rafer Johnson lit the flame.

Johnson, who has been involved with the Special Olympics since its beginning, said sports competition teaches important lessons.

“I think in the long run, what we learn in sports helps us to be better athletes, but it also be life lessons taught that are going to help us, in a sense, be the best we can be in other places other than on the field of competition,” Johnson said.

The Special Olympics Summer Games are held every four years in a different city. The last were held in Athens. The competition features 25 sports, from aquatics to track.

The game were started in 1968 by Eunice Kennedy Shriver, the sister of President John F. Kennedy. And the movement has grown to millions.

Organizers have high hopes for the 2015 games, "Los Angeles has incredible facilities. The diversity in Los Angeles is a great asset, and the ability to engage the media and the entertainment community".

Special Olympics athlete Debi Anderson said the athletes have a message: "They will show the world what they can do instead of can't do.”

TThe games will continue through out August 2.