Update Required To play the media you will need to either update your browser to a recent version or update your Flash plugin.
By VOA
Sep 8, 2017

On August 27, a revolutionary court in Tehran sentenced Mohammad Ali Taheri, the founder of an Iranian spiritual movement, to death. He was charged with founding a religious cult and “spreading corruption on earth.”

Mr. Taheri, who researched and taught alternative medicine at the university level, started an organization, known as Erfan-e Halgheh, or Circle of Mysticism, in the 2000s. As the movement grew, it attracted the attention of the authorities who considered it subversive to the established Shiite orthodoxy. Mr. Taheri was arrested in 2010 and served five years in prison for such crimes as “insulting the sacred” and “carrying out illegal medical procedures.” After his sentence was complete, instead of being released, he was sentenced to death for the first time for spreading corruption on earth. On appeal, that sentence was overturned. But he has remained in prison since 2011. 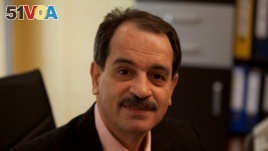