State of Human Rights in Zimbabwe

Update Required To play the media you will need to either update your browser to a recent version or update your Flash plugin.
By VOA
Mar 19, 2017


As has been the case in previous years, human rights conditions in Zimbabwe remain deeply troubling, according to the recently-issued State Department Country Reports On Human Rights Practices.

In 2016, the government of President Robert Mugabe continued to violate human rights, disregarding the protections enumerated in the country's 2013 constitution. The most important human rights problems remained the government's targeting members of non-ZANU-PF parties and civil society activists for abduction, arrest, torture, abuse, and harassment; partisan application of the rule of law by security forces and the judiciary; and restrictions on civil liberties, including freedoms of expression and assembly. 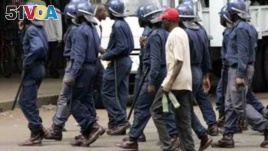 In 2016, the government intensified its repression of peaceful protesters. Police abuse increased, and security forces used excessive force to crush dissent. Human rights defenders, civil society activists, journalists, and government opponents, were harassed, threatened or faced arbitrary arrest by security forces. The government restricted freedom of the press. Although citizens have the constitutional right to choose their own government in free and fair elections, this right was restricted.

Corruption at all levels of government was rampant in Zimbabwe. Despite the fact that the government took some limited steps to punish security sector officials and ZANU-PF supporters who committed violations, impunity for past politically-motivated violence was a problem. The government, for example, failed to provide any updates on the 2015 disappearance of activist Itai Dzamara.

Rape, domestic violence, and discrimination against women remained widespread problems. Despite the fact that last January, Zimbabwe's Constitutional Court declared child marriage to be unconstitutional and set 18 as the minimum marriage age, the government has yet to amend or repeal all existing marriage laws that still allow child marriage.

On the other side of that spectrum, widows were forced from their marital homes by relatives, and their property confiscated, with little recourse to the formal justice system.

The State Department Human Rights Reports are not meant to point fingers or judge the actions of sovereign nations. Nor are these U.S. policy documents. The Reports do not draw legal conclusions.