Staving Off Hunger in Ethiopia and Kenya

Update Required To play the media you will need to either update your browser to a recent version or update your Flash plugin.
By VOA
Aug 20, 2017


The Famine Early Warning Systems Network, or FEWS NET, a U.S. government-funded provider of information and analysis on food insecurity, is signaling that the hunger and nutrition situation in southeastern Ethiopia is deteriorating, with numerous households in the drought-ridden Somali regional state already experiencing severe food insecurity. Likewise in Kenya, although the situation is not as dire, insufficient March-to-May rainfall has left people living in the country's arid and semi-arid regions at risk of crisis-level food insecurity in the near future.

In 2011, the Horn of Africa suffered one of the worst droughts on record. The next few years saw sub-par rainfall, which means that the hardest-hit regions did not have the chance to recover, either for growing grain or replenishing pasturage. Then came the 2015-2016 season, and the abnormally warm El Niño phase of the global weather pattern. As a result, the most fragile regions in the arid Horn of Africa, once again saw the deterioration of agricultural and livestock production, rising food prices, and a future wrought with hunger, malnutrition, and resulting diseases. 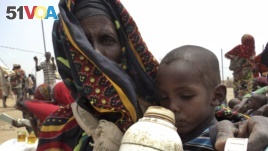 That is why the United States announced in early August that it will deliver more than 169 million dollars' worth of humanitarian aid for Ethiopia and Kenya.

In doing so, the United States is scaling up emergency food assistance. The funds will provide such necessities as specialized nutrition supplies to treat malnourished children, safe drinking water, and essential health services.

In Ethiopia, this assistance will provide food aid for about three million people.In addition to aid for Kenyans affected by the drought, the United States is also providing support for refugees in Kenya who have fled drought and conflict in their own countries.

“It is not a famine, but it is rising up to the levels of getting close to famine," said Matt Nims, acting director of Food for Peace at the U.S. Agency for International Development, or USAID."That is why we want to act now so that we're not into that stage.”