Still No Accountability for Politkovskaya's Murder

Update Required To play the media you will need to either update your browser to a recent version or update your Flash plugin.
By VOA
Oct 13, 2017


It's been eleven years since renowned Russian journalist Anna Politkovskaya was shot and killed in the elevator of her apartment building in Moscow after she exposed human rights abuses in Chechnya and corruption in the Kremlin.

In June 2014 sentences were handed down to five individuals for her murder, but the mastermind who ordered her killing remains unknown – more than a decade after her death. 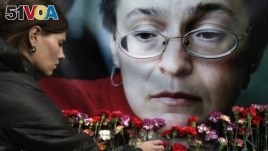 FILE - A woman places flowers before a portrait of slain Russian journalist Anna Politkovskaya, in Moscow.

On the most recent anniversary of her murder, U.S. State Department Spokesperson Heather Nauert called on Russian authorities “to identify and prosecute the person or persons who ordered, planned and funded this terrible crime.”

According to the latest State Department annual report on human rights, in 2016 no progress was reported in establishing accountability for Ms. Politikovskaya's death, or for the killing of other high-profile journalists, such as Paul Klebnikov in Moscow in 2004 or Natalia Estemirova in Chechnya in 2009.

In her statement on the anniversary of Anna Politikovskaya's death, Spokesperson Nauert wrote that “Ms. Politkovskaya's reporting brought to light the violation of human rights in Russia and the suffering of victims of the war in the North Caucasus region.” She noted that “[r]ecent reports of abuses against LGBTI persons and extrajudicial killings in Chechnya leave us deeply concerned that human rights violations are still regularly committed with impunity in this region.”

“The unsolved murders of Ms. Politkovskaya - a dual U.S.-Russia citizen —- and other journalists in Russia, as well as threats against journalists exposing more recent abuses in Chechnya,” Ms. Nauert said, “have only worsened an atmosphere of intimidation for the independent press.”

From its founding, the United States has recognized that a free and independent press is indispensable to democratic governance and the rule of law. The Russian people deserve that their government recognize free expression as a fundamental human right that must be protected, not flouted or crushed.