Update Required To play the media you will need to either update your browser to a recent version or update your Flash plugin.
By VOA
Aug 30, 2016


The Boko Haram terrorist group has one overriding goal—to seize as much territory as it can hold so it can impose its extreme ideology on the people living there. Beyond that, Boko Haram has “no agenda other than to murder teachers, burn books, kidnap students, rape women and girls, and slaughter innocent people, most of whom are Muslims,” said Secretary of State John Kerry during his recent visit of Nigeria. “[Boko Haram] has a complete and total disrespect for life, the opposite of every religion. It has a complete nihilistic view of the world. It fears knowledge. It fears education. It fears tolerance.”

This story is repeated around the world, wherever a violent extremist group uses murder, torture and enslavement to force local populations into submission. And although such activity is abhorrent to nearly everyone, everywhere, still, these terrorists are able to recruit new members among otherwise peaceful people.

“There are far too many who join the ranks of these organizations because they have trouble finding meaning or opportunity in their daily lives – because they are deeply frustrated and alienated – and because they hope groups like Boko Haram will somehow give them a sense of identity, or purpose, or power,” said Secretary of State Kerry.

Derailing recruitment into terror groups requires a three step approach. First, we must build public trust in governments and institutions by eliminating corruption, human rights violations, and other abuses of power, and by insisting on transparency and accountability. 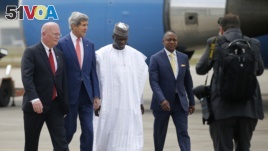 “There is nothing more demoralizing, more destructive, more disempowering to a citizen than the belief that the system is rigged against them,” said Secretary Kerry.

As a bonus, once free from corruption, the economy will flourish, which will help bring about the second step—providing economic and educational opportunity for the young.

And finally, it is important to build bridges of tolerance and acceptance, said Secretary Kerry.

“All of these efforts – fighting corruption, promoting good governance, promoting opportunity for men and women alike, showing compassion and understanding for fellow citizens, even when it's difficult,” said Secretary of State Kerry, “all of these things will do an enormous amount to reduce the threat that is posed by violent extremism and to prevent it from re-emerging in the future.”