Update Required To play the media you will need to either update your browser to a recent version or update your Flash plugin.
By VOA
Oct 19, 2017


The President, in consultation with the Secretary of State, determined the Administration is unable to certify under a domestic law that the benefits Iran receives from the nuclear deal known as the Joint Comprehensive Plan of Action, or JCPOA, are “proportionate” to the measures Iran has taken.

After completing a review of U.S. policy toward Iran, President Donald Trump announced on October 13 that he “cannot and will not make this certification.”

He also cited the Iranian regime's destabilizing activity including support for terrorist proxies in the Middle East; its financing of terrorism around the world; and its ballistic missile program as part of the totality of concerns he has with the Iranian regime. 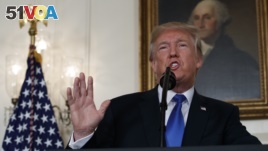 President Donald Trump makes a statement on Iran policy in the Diplomatic Reception Room of the White House, in Washington, Oct. 13, 2017.

The refusal by President Trump to make the certification under the Iran Nuclear Agreement Review Act of 2015 does not mean that the United States has withdrawn from the deal. It means that the Administration will work closely with Congress and international partners to address what President Trump calls the JCPOA's “many serious flaws:”

“So that the Iranian regime can never threaten the world with nuclear weapons. These include the deal's sunset clauses that, in just a few years, will eliminate key restrictions on Iran's nuclear program. The flaws in the deal also include insufficient enforcement and near total silence on Iran's missile programs.”

Congress has already begun the work to address these problems, President Trump said:

“As we have seen in North Korea, the longer we ignore a threat, the worse that threat becomes. It is why we are determined that the world's leading sponsor of terrorism [Iran] will never obtain nuclear weapons.”

President Trump expressed the hope that new U.S. measures directed at the Iranian regime -- including new sanctions against Iran's Islamic Revolutionary Guard Corps pursuant to a counter terrorism authority -- will compel Iran “to reevaluate its pursuit of terror at the expense of its people...[and] will help bring about a future of peace, stability and prosperity in the Middle East.”