Update Required To play the media you will need to either update your browser to a recent version or update your Flash plugin.
Jeffrey Young
March 28,2016


As Sub-Saharan Africa strives to break the shackles of poverty, its population of nearly one billion people is hard at work.

A 2014 report by the U.S. Department of Labor concluded that one out of five Sub-Saharan children are working under difficult if not squalid conditions.

In a skype interview for South Africa, the International Labor Organization's says Alex Soho said, poverty is the driving force behind child labor. 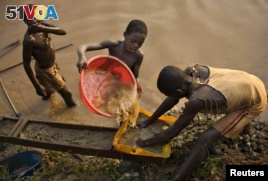 "They are poor. Their income is low. They cannot afford hiring adult laborers,” he said. ”So they have to rely, you know, on the work of their kids. This is true for farmers. This is true, also, for farm workers, who have to take them [children] along with them to the plantations, in particular, the whole family, to complete the tasks they've been assigned."

For these children, daily life consists of more than just backbreaking labor. Hazardous conditions are commonplace — not just on the farms, where pesticides abound and machinery meant to be run by adults poses threats to children, but also in mining, where conditions are sometimes abominable.

Day after day, children stand in muddy creeks and rivers scouring the water for specks of gold dust. There are dangers everywhere — machinery, man-sized or bigger rocks, hazardous chemicals and water-borne diseases.

Another Sub-Saharan African industry dependent on child labor is cocoa, used in the production of chocolate. The U.S. Labor Department report said child labor is prevalent on cocoa plantations in Cameroon, Ghana, Guinea and Sierra Leone. In two other nations — Ivory Coast and Nigeria — it's not only that children are working; it’s that they are being forced to work.

An organization representing the industry says families, not corporations, are mainly responsible for the growth of child labor. 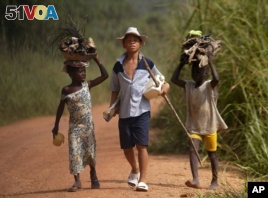 FILE - Children living in a cocoa-producing village walk back from the fields carrying wood and food stuffs on their heads on the outskirts of the town of Oume, Ivory Coast, June 30, 2005.

"More than 99.5 percent of child labor that exists is taking place on the family farm,” said Nick Weatherill, executive director of the International Cocoa Initiative. “And, therefore, the much more extreme and definitely concerning [aspect] of [human] trafficking and kids working in indentured labor — that's less than 0.5 percent. It's still a phenomenon. It's still real, but it's principally driven by criminality. It is not driven by industry [and] corporate business practices."

Anti-child labor activists in the United States are trying to use the courts to confront the chocolate industry. Lawsuits pending in California state courts against Hershey, Mars and Nestle are asking for money for residents who bought chocolate. State law requires candy makers to declare on product packages that child slavery was involved in their making.

Aside from the physical dangers, experts say working is an obstacle to a child's long-term economic advancement, as well.

"This work deprives a child of education and, obviously, of a future, because if a child cannot go to school, the child cannot have a future at all,” Soho said. “And this is why the measures taken by the ILO and its partners, you know, to support national stakeholders, focus on education.”

Soho and others say that keeping children in school and helping families pull themselves out of poverty are the keys to helping the people of Africa achieve the kind of growth they need to improve their position in the global marketplace.