Support for Security Assistance in the Sahel

Update Required To play the media you will need to either update your browser to a recent version or update your Flash plugin.
By VOA
Nov 2, 2017


Secretary of State Rex Tillerson has announced that, pending consultation with Congress, the United States will provide up to $60 million dollars to support a promising and developing regional counterterrorism effort in the Sahel.

The assistance will support activities for a joint counterterrorism force that the Group of Five (G5) Sahel states – Burkina Faso, Chad, Mali, Mauritania, and Niger - agreed to set up earlier this year to fight terrorist and violent extremist groups, such as al-Qa'ida in the Maghreb, ISIS, and associated groups. 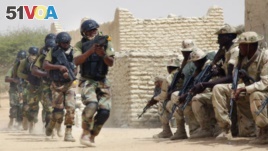 In a statement, Secretary Tillerson said, “Defeating terrorism depends on making sure terrorist organizations cannot have safe havens on any continent... This is a fight we must win, and these funds will play a key role in achieving that mission.” He went on to say that this pledge, “will bolster our regional partners in their fight to ensure security and stability in the face of ISIS and affiliated groups and other terrorist networks.”

In remarks at a Security Council briefing on peace and security in Africa, U.S. Representative to the United Nations Ambassador Nikki Haley spoke of the violence that has spread across the Sahel, not only from terrorists, but from criminals who traffic in drugs and human beings seeking to profit from the chaos in the region. She praised the men and women of the armed forces of the G5 Sahel countries, as well as the UN peacekeepers who are “serving in the world's most dangerous peacekeeping mission” in Mali.

Ambassador Haley promised that the United States will continue its longstanding bilateral support to the G5 members' security forces. Speaking of the new pledge of up to $60 million dollars for the joint counterterrorism force through bilateral assistance, she noted that the force will need ongoing support, and that the United States is eager for opportunities to work closely with its partners to make the effort a successful one.

Ambassador Haley emphasized, however, that the G5 force “must be first and foremost owned by the countries of the region themselves. We expect,” she said, “that the G5 countries will take on full regional ownership of the force within a period of three to six years, with continued U.S. engagement. This is the approach that will be most effective, in the end, in freeing the region from terror.”

“We welcome this regional ownership of security and stabilization in the Sahel,” said Ambassador Haley, “[and] we will continue to stand with the people of the region.”