Update Required To play the media you will need to either update your browser to a recent version or update your Flash plugin.
Michael Bowman
February 29,2016


In coming days, Americans could have a much better sense of who will be this year's Republican and Democratic presidential nominees.

Democrats and Republicans are competing in primaries and caucuses in at least 11 states Tuesday, and, in most of those states, polls show Republican front-runner Donald Trump and Democratic front-runner Hillary Clinton with substantial leads.

The so-called "Super Tuesday" contests could give Trump a virtual glide path to the Republican nomination.

Similarly, Clinton could emerge as the presumptive Democratic nominee. Her challenger, Senator Bernie Sanders, insists the battle is far from over and is sticking to his message. 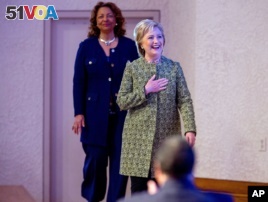 “The middle class of this country has been shrinking and almost all new income and wealth has been going to the top one-percent,” Sanders said.

“Donald Trump will never be the Republican nominee,” he said. “We are not going to let the conservative movement, and the party of Ronald Reagan and the party of Abraham Lincoln be taken over by a first-rate con artist.” “Rubio has won nothing. He could not get elected dog catcher in Florida, they hate him in Florida,” said Trump.

Ever a lightning rod for controversy, Trump is drawing sharp criticism from Democrats, too. Clinton's dominating victory in South Carolina’s Democratic primary allows her to pivot towards a general-election campaign message.

Whether lauded, vilified or mocked, Trump continues to dominate headlines and consume an oversized portion of America’s political oxygen. Being at the center of the storm has served him well so far, and will be put to the test once again on Tuesday.