Update Required To play the media you will need to either update your browser to a recent version or update your Flash plugin.
Pamela Dockins
May 18,2016


VIENNA— The International Syria Support Group has stepped up efforts to help stabilize Syria with new provisions that would exclude repeat cease-fire violators from being protected under the cessation of hostilities agreement and would also expand humanitarian air drops into besieged areas. However, challenges remained as the multi-national group wrapped up its meeting in Vienna.

With unresolved issues that include accusations of continuing Syrian regime airstrikes on civilians, there was little notable progress at U.N.-led political talks between the government and opposition. Snags remain in delivering humanitarian aid as the International Syria Support Group (ISSG) convened in Vienna to discuss the Syrian crisis

“No one can be remotely satisfied with the situation in Syria. It is deeply disturbing,” said U.S. Secretary of State John Kerry.

But as he stood with his Russian counterpart and the U.N.’s Syria envoy, Secretary Kerry denied the U.S. and world powers have lost leverage in efforts to get compliance from Syria’s Bashar al-Assad. 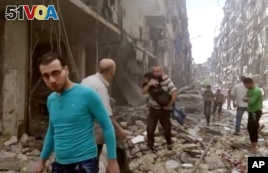 FILE - Image made from video and posted online from Validated UGC, a man carries a child after airstrikes hit Aleppo, Syria.

"There is leverage in the fact that this war will not end for him (Assad) or for his people without a political settlement; everybody understands that,” said Kerry.

But some, such as Nussaibah Younis of the Atlantic Council, think the way to break the logjam in Syria is to alter the facts on the ground.

“To have military leverage that you can use to back up your side of the argument and ultimately to threaten the other side that there will be consequences if they are not prepared to come to a political agreement,” said Younis.

Others, such as Perry Cammack of the Carnegie Endowment for International Peace, say the U.S. and the Syria Support Group should keep pressing for a comprehensive political solution.

“We need to make it clear that there is no ‘give’ in terms of our desire and frankly our demand that Bashar [al Assad] not be around at the end of the process,” said Cammack.

If that fails, said Cammack, world powers should push to de-escalate the violence and increase humanitarian assistance – moves that would at least reduce the suffering of the Syrian people.