Taking a Side on South Sudan

Update Required To play the media you will need to either update your browser to a recent version or update your Flash plugin.
By VOA
Dec 2, 2017


The U.S. welcomes an order by President Salva Kiir of South Sudan to allow unimpeded humanitarian access in the war torn country. The pledge is only one of several that need to be implemented. The U.S. has made it clear to leaders in South Sudan that they must honor their declared ceasefire, engage meaningfully in the planned regionally brokered peace talks, stop the obstruction harassment of aid workers, and cooperate fully with the United Nations Mission in South Sudan.

U.S. Permanent Representative to the United Nations Nikki Haley stated that the United States will not be ambiguous in the face of atrocity during a recent speech at the U.S. Holocaust Museum. Describing the horrific suffering she saw among South Sudanese refugees on a recent trip to the region, Ambassador Haley noted: 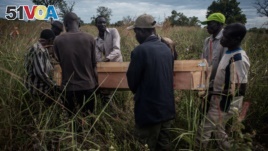 Pallbearers at the border of South Sudan and Uganda carry the casket containing the remains of Duku Evans, a civilian killed November 3 amid fighting between government troops and rebels in Logo displaced persons camp in Kajo Keji, South Sudan, Nov. 5, 20

Ambassador Haley said that “both sides” in the conflict are responsible for atrocities against civilians. “But the government is primarily responsible for ethnically-based killings and for deliberately blocking the delivery of humanitarian assistance to suffering people.”

Ambassador Haley met with Kiir during her trip and laid out U.S. concerns:

“The leaders of that country need to take responsibility and seize this opportunity. I laid out a series of things we expect from President Kiir in the near future, and a series of things he will face if he does not deliver. Time will tell if he makes good on his commitments. And time is short for him to do so.”

That resuscitation could happen as officials and rebel leaders attend internationally brokered peace talks next month. Michael Morrow, the U.S. Embassy's charge d'affaires in South Sudan, told Bloomberg News that both sides will face sanctions should they fail to act in good faith. If “there are any spoilers of the process, if there is anyone who reneges on their commitment,” he said, “They can expect to face harsh measures.”