Update Required To play the media you will need to either update your browser to a recent version or update your Flash plugin.
By VOA
Sep 25, 2016


It's no secret that the best way to jump-start a sluggish economy is to invest in women. That's because when women enter the formal economy, they invest their earnings into their families and their communities, pulling both out of poverty. It's also true that the more formal education a woman attains, the more money she earns, thus contributing even more to those around her.

For many years now, the United States has been working to advance the rights of women and girls around the world, and to help open wide some of the doors that have kept women from rising within their societies, from advancing to high political office, and from attaining the highest levels of education that lead to better jobs.

When it comes to education and employment, women are most severely under-represented in the fields of science, technology, engineering, and mathematics. This is true nearly everywhere, but particularly in those regions where women who pursue careers in these fields lack support. And through long experience, we have found that mentoring such women helps improve their chances of success. 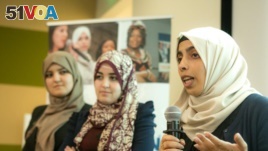 That is why, six years ago, the United States initiated the TechWomen program, which helps women in these fields living in the Middle East, Africa and Central Asia, to reach their full potential. TechWomen helps them strengthen their entrepreneurial and product development skills, build networks of people in their chosen field, and learn meaningful ways to be an effective resource for young women and girls, and to play an active role in the economic advancement of their home country.

In September, the latest group of nearly 90 women from 19 countries arrived in the United States to take part in this year's TechWomen program. These women, already leaders in the science, technology, engineering, and mathematics fields, are collaborating with their American counterparts on specific projects at leading science and technology companies in the San Francisco Bay Area and Silicon Valley.

Once this year's program ends on October 17th, the women will return home to expand the TechWomen network, collaborate with women who participated in previous years' TechWomen programs, and to conduct workshops for women and girls who have expressed interest in pursuing science and technology-based careers. They will help develop the next class of TechWomen, and create greater opportunities for generations of girls to come.