Update Required To play the media you will need to either update your browser to a recent version or update your Flash plugin.
By VOA
Aug 6, 2018


August marks the tenth anniversary of Russia's invasion of Georgia, a country of less than 4 million people in the South Caucasus. The causes of the conflict between the two countries – particularly long-running disputes between Georgia and its breakaway regions of Abkhazia and South Ossetia – are complex, but the fact remains that on August 7th, 2008, Russia launched a full-scale land, air and sea attack against its tiny neighbor, across an internationally recognized border.

The conflict pitted 70,000 Russian troops against Georgia's army of about 10,000 soldiers and another 10,000 reservists. Needless to say, the “war” did not last long—it was over by August 12. 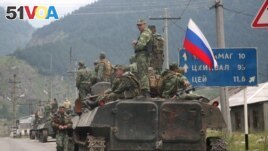 A column of Russian armored vehicles move through North Ossetia towards the breakaway republic of South Ossetia's capital Tskhinvali. (File)

In response to the Russian invasion of Georgia, France, supported by the United States and its European allies, helped broker a ceasefire agreement. The agreement was signed by then-Presidents of both countries, Mikheil Saakashvili for Georgia and Dmitriy Medvedev for Russia. Under the ceasefire agreement, Russia promised an immediate withdrawal of its forces from Georgia to their positions before the hostilities began.

Russia not only failed to live up to this and other requirements of the ceasefire agreement; On August 26th, it exacerbated the situation by recognizing Georgia's break-away regions of Abkhazia and South Ossetia as independent countries. For the past ten years, Russia has occupied Abkhazia and South Ossetia in violation of the ceasefire agreement.

“The United States unequivocally condemns Russia's occupation on Georgian soil,” said Secretary of State Mike Pompeo at a May 2018 plenary session of the U.S.-Georgia Strategic Partnership. “Russia's forcible invasion of Georgia is a clear violation of international peace and security and goes against the basic principles of the Charter of the United Nations and the Helsinki Final Act,” he said.

“The Russian-occupied Georgian territories of Abkhazia and South Ossetia are integral parts of Georgia. The United States supports Georgia's sovereignty and territorial integrity with its internationally recognized borders. We call on Russia to fulfill all of its obligations under the 2008 ceasefire agreement to withdraw its forces to pre-conflict positions, [and] to reverse its recognition of the Georgian regions of Abkhazia and South Ossetia as independent states.”