Update Required To play the media you will need to either update your browser to a recent version or update your Flash plugin.
By VOA
Nov 29, 2017


The United States is deeply concerned over the release from house arrest in Pakistan of Lashkar-e-Tayyiba leader Hafiz Saeed. Lashkar-e-Tayyiba, or LeT, is a designated Foreign Terrorist Organization responsible for the death of hundreds of innocent civilians in terrorist attacks, including a number of American citizens. His release came after a panel of judges dismissed a government request to continue his house arrest.

Saeed's release, said White House press secretary Sarah Sanders, "sends a deeply troubling message about Pakistan's commitment to combating international terrorism and belies Pakistani claims that it will not provide sanctuary for terrorists on its soil." She warned that "If Pakistan does not take action to lawfully detain Saeed and charge him for his crimes, its inaction will have repercussions for bilateral relations and for Pakistan's global reputation."

“Saeed himself is a notorious terrorist who stands accused of having masterminded the November 2008 Mumbai, [India,] attacks that killed 166 people, including six American citizens,” said Ms. Sanders. 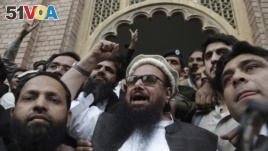 “A clear international consensus exists regarding Saeed's culpability — he was designated by the United Nations under UN Security Council Resolution 1267 in December 2008. The Department of the Treasury has designated Saeed as a Specially Designated Global Terrorist, and the United States, since 2012, has offered a $10 million reward for information that brings Saeed to justice,” said press secretary Sanders.

LeT and several of its front organizations, leaders, and operatives remain under both State Department and Treasury Department sanctions.

President Trump noted in his Afghanistan policy speech that the United States has been paying Pakistan billions of dollars at the same time they are housing the very terrorists that the U.S. is fighting. "That will have to change," he said. "No partnership can survive a country's harboring of militants and terrorists who target U.S. servicemembers and officials. It is time for Pakistan to demonstrate its commitment to civilization, order, and to peace."