Update Required To play the media you will need to either update your browser to a recent version or update your Flash plugin.
By VOA
Apr 11, 2017


At the start of the holiest week in the Christian calendar, terrorists struck two Coptic Christian churches in Egypt.

A bomb exploded inside St. George's Church in the northern city of Tanta during Palm Sunday religious services, and, in a separate incident, a suicide bomber detonated a device outside St. Mark's Coptic Orthodox Cathedral in Alexandria. Scores of people were killed and over a hundred injured in the attacks. 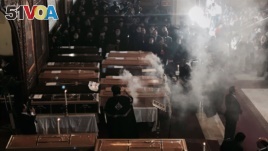 ISIS has claimed responsibility for both attacks.

Egyptian President Abdel Fattah al-Sisi, who recently met with President Donald Trump in Washington, announced three days of mourning for the victims of the attacks, and declared a three-month state of emergency. Parliament has approved the measure.

President Trump spoke by phone with President al-Sisi on the day of the attacks, conveying his deepest condolences to Egypt and the families who lost loved ones in the heinous terrorist attacks. The White House said in a statement that the President “also expressed his confidence in President al-Sisi's commitment to protect Christians and all Egyptians.”

Acting U.S. State Department Spokesperson Mark Toner also condemned the attacks and reiterated that “The United States will continue to support Egypt's security and stability in its efforts to defeat terrorism.”

The UN Security Council called the attacks “heinous and cowardly.” In a statement, the Security Council reaffirmed “that terrorism in all its forms and manifestations constitutes one of the most serious threats to international peace and security...The members of the Security Council reiterated that any acts of terrorism are criminal and unjustifiable, regardless of their motivation, wherever, whenever and by whomsoever [they are] committed.”

The Security Council emphasized “the need to bring perpetrators, organizers, financiers and sponsors of these reprehensible act of terrorism to justice and urged all States...to cooperate actively with the Government of Egypt and all other relevant authorities in this regard.”