In a bid to protect the rights of citizens, the founders of the United States included in the Constitution, the legal framework of the new government, ten Amendments: three to protect individual rights and seven to ensure justice. They are collectively named the Bill of Rights.

The Fifth Amendment defines constitutional limits on the government's prosecution of persons accused of crimes. 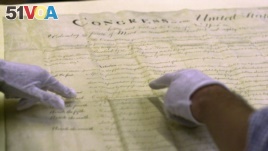 FILE - Workers at the Massachusetts State Archives in Boston point to a section of an original copy of the Bill of Rights.

The Amendment's first clause requires that one may not be tried for a serious crime unless he or she is first indicted by a grand jury. The grand jury, an old common-law English institution, acted as a sort of filter, protecting the accused from unreasonable or punitive prosecutions by the English monarchy. The Framers of the Constitution chose to retain the Grand Jury system to protect the accused from overzealous prosecution by the central government.

The second clause protects the accused from repeated trials for the same offence, so-called double jeopardy. This means that once an individual is found to be innocent of a crime, he or she cannot be harassed through the courts by multiple prosecutions for the same alleged offense.

The third clause protects the accused from being forced to testify against him or herself in criminal cases. During trial, a witness may “plead the fifth” Amendment, thus declining to answer questions where the answers might incriminate him or her.

The fourth, or Due Process clause, guarantees fair treatment through the judicial system for all persons. It requires the government to respect all rights, guarantees, and protections afforded by the Constitution and all applicable laws before the government can deprive any person of life, liberty, or property.

Finally, the Just Compensation clause declares that although the federal government does have the right to take private property for public use, it must pay the owner of that property fair market value at the time of the taking.

The Fifth Amendment prevents excesses of the courts, something that many of the Constitution's Framers had witnessed under British rule. It prevents forcing the accused into self-incrimination through intimidation, and guarantees fair treatment by the courts.

In the words of mid-20th century Supreme Court Justice William O. Douglas, “The Fifth Amendment is an old friend and a good friend, one of the great landmarks in men's struggle to be free of tyranny, to be decent and civilized.”